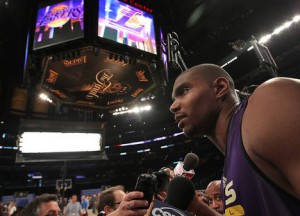 Andrew Bynum is expected to have his ailing right knee examined today and his status for Game 5 is uncertain.

Bynum has been playing with a torn meniscus since the first round of the 2010 NBA playoffs, but he reaggravated the injury in Game 3 of the NBA Finals. Lakers officials say there is swelling in the knee and Bynum has experienced some discomfort. He played just 12 minutes in Game 4 and scored just two points.

“I haven’t got any expectations. I don’t know what his condition is today,” Jackson said at his Friday morning news conference.

Jackson inserted Bynum in the starting lineup last night, but opted for Lamar Odom in the second half as Bynum received extra treatment at halftime. But when he returned, he was ineffective and appeared limited in his movement.

Not having Bynum for much of Game 4 really compromised the Lakers’ interior  defense as the Celtics outrebounded the Lakers, 41-34, and dominated them, 54-34, in points in the paint.

“They miss him,” Celtics coach Doc Rivers said of the Lakers’ 7-foot center. “He’s got great size and length. We attacked the paint and obvioulsy he wasn’t there. When he’s not on the floor there’s a big difference.”

Because Game 5 is not until Sunday, the Lakers will use these next two days to evaluate Bynum’s injury before making a decision on his playing status. Though it was a little bit of a struggle to get through Game 4 Jackson said Bynum still had an impact in the game.

“Even with him dragging the leg around a little bit, he still helped us in situations last night. Andrew still has the length and the strength to capture rebounds.

“We’ll use him if he’s available and able. But we’re certainly not going to put him in situations that’s going to hurt himself or the team.”