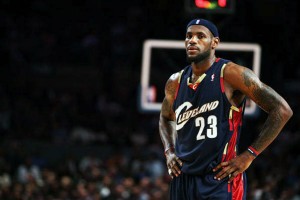 LeBron James would love to bring a championship to Cleveland. (GETTY IMAGES)

LeBron James is a true resident expert of Cleveland sports lore. He knows all too well the monumental failures of professional sports teams in Cleveland.

After the Akron native powered the Cavaliers to a 66-16 regular-season record, clinching home-court advantage throughout the NBA playoffs, James immediately turned his attention to the bigger picture – winning a championship. It is something Cleveland fans have not tasted since 1948 when Bob Feller, Bob Lemon and Larry Doby led the Cleveland Indians to a World Series victory.

“The thing is with the history of the Cavaliers, you go to the last shot by Jordan … then you go to the final drive with John Elway … and then you go to Jose Mesa, you know, the debacle in the bottom of the ninth. I mean, it’s bad. And Cleveland fans know,” said James, who basically captured a lot of the painful memories of Cleveland sports fans with one comment. The ones he did not bring up were the scars from Earnest Byner’s fumble in the 1988 AFC title game against Elway’s Broncos, and the Indians’ inability to close the deal in the 1995 and 2007 World Series.

“For us to be in a position to make them forget about that, we’ve done that thus far,” James added. “But, we still got a long way to go, and hopefully we can erase all those memories.”

For the past 60 years, Cleveland pro teams have endured a series of mishaps and just plain bad luck that has left the city starving for a title. The day LeBron James became a member of the Cavaliers, which was at the start of the 2003-04 season, Cleveland fans believed that was the day the Cavs turned the corner. Because of his God-given ability to soar above the competition and part any defense with his massive frame, James was annointed as the Chosen One – the one to lift the city of Cleveland to a place it has never been in six decades.

Before LeBron, visions of Michael Jordan beating three Cavalier defenders to the top of the circle and rising over Craig Ehlo for a game-winning jump shot during the 1989 NBA playoffs was the best thing anyone could remember. Now, LeBron is changing everyone’s perception and the dream is beginning to look more and more like reality.

Six years after the Cavs made him the No. 1pick in the draft, James has the Cavaliers in the best position to win the franchise’s first NBA championship. Because the Cavs own the best record in the league, they don’t have to win a road game to win a title. The road to the NBA Finals goes through Cleveland. How’s that for a stage-setter?

But before the James Gang gets fitted with championship rings, they need to exocise the demons of Cleveland’s past, which means getting past the defending world champs in the Boston Celtics and the Orlando Magic in the Eastern Conference, and surviving a looming and inevitable showdown with the Los Angeles Lakers in the NBA Finals.

A Cavs-Lakers final is the dream matchup NBA officials are hoping for because it also means LeBron James will be pitted against Kobe Bryant with the title of “best player on the planet” on the line. The NBA playoffs are all about “Can your best player outplay my best player?” In their two regular-season meetings, Kobe put the handcuffs on LeBron and the Lakers swept the season series. Based on that, should LeBron’s Cavaliers face Kobe’s Lakers in the NBA Finals, Cleveland fans are not going to like the end result.