During the Tim Duncan Era in San Antonio, making the playoffs is about as automatic as filing taxes each year in April.

However, making the playoffs this season has proven to be very taxing on Duncan and the Spurs.

The Spurs are currently in a dogfight just to hold on to their low seeding in the Western Conference, a far cry from their glory days when home-court advantage was a given.

In the middle of this uncharacteristic struggle is Tim Duncan, San Antonio’s franchise player and three-time NBA Finals MVP.

After watching Duncan shoot 1-for-10 against the Magic on March 17 and go 2-for-11 against the Lakers last night, it is becoming clear that Duncan is no longer the dominant post player in the league. Heck, he may not be the best player on his own team.

Now, don’t get me wrong. Duncan is still an All-Star player and NBA teams would kill to have him on the roster. He’s the greatest power forward in history. He is still a decent scorer (18.2 points per game), still one of the top rebounders in the game (10.3) and remains the anchor of the Spurs defense (1.6 blocks).

But against Pau Gasol on Wednesday night, Duncan appeared overmatched and had two of his jump shots sent right back in his face by the 7-foot-1 Spaniard, who is not known to be a lock-down defender. Duncan finished with only six points and was never a factor.

Which leads me to two very important question that need to be addressed: 1) Is Duncan still capable of leading the Spurs to a championship? 2) Do the Spurs still run their offense through Duncan?

I think the answers to both questions are “No” and “No.” 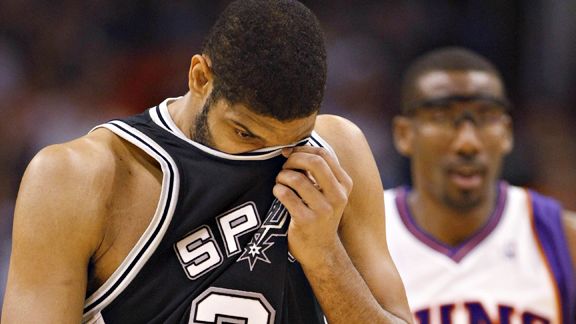 Duncan has also logged more than 35,000 minutes throughout his 12-year NBA career and is probably closer to retirement than close to being the best interior player in the league.

Spurs coach Gregg Popovich has been trying to monitor his minutes the past three seasons, but because the Spurs are not a cinch to make the postseason this season Pop has no choice but to play Duncan deep into ballgames.

This puts a heavy strain on Duncan, who seems to be laboring whenever he tries to extend himself against quality teams. He doesn’t have the usual lift on his jump hooks and opponents have learned to defend his signature bank.

Popovich and Spurs GM R.C. Buford need to take a hard look at this team and decide whether or not to stay with the Duncan-Ginobili-Parker as the base of their franchise.

Duncan is 33 years old and his creaky knees are major issues. Manu Ginobili will become a free agent at the end of the season, and his future remains uncertain. Parker still has many good years as the team’s point guard, but he can’t do it alone.

DeJuan Blair has been a nice addition this season, but he’s a 6-6 power forward who struggles against length. George Hill is probably the only young player on the Spurs roster who can develop into a superstar.

The Duncan-led Spurs can still make the playoffs this year, but the Duncan-led Spurs are no longer in the championship conversation. San Antonio has a daunting schedule down the stretch and there is a strong possibility the Spurs could fall to the No. 8 spot, which means a date with the L.A. Lakers in the first round. And judging by how the Lakers stifled the Spurs on their home court, it could be a very short series.

The rebuilding process in San Antonio is already underway and there’s a lot of work to be done.