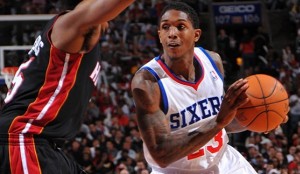 But to put Williams’ monster game into perspective, it was an EXHIBITION game where defense was like a turnstile, set plays were few and far between, and nobody took a charge in the paint. Sweet Lou may never have another game like this. Too bad he wasted it during a glorified pickup game.

WATCH HIGHLIGHTS OF THE PHILLY-D.C. GAME

Durant matched Williams shot-for-shot, finishing with 56 points. At one point early in the fourth quarter, Williams swished two 3-pointers that prompted the public address announcer to yell “Lou Williams is on fire! He cannot be stopped!” Down three with 15 seconds left, Durant missed a deep three and Lowry iced the game at the foul line.

Depending on the lockout negotiations, more pickup games could be on the way. Memo to the players: Please end the lockout now!