Dirk Nowitzki calls the Dallas-San Antonio series a street brawl. Spurs coach Gregg Popovich said Game 4 was about as physical and hard-fought game he’s seen in quite some time.

There were three flagrant fouls called, all in the second half. The fireworks started with 1:21 remaining in the third quarter when Richard Jefferson was called for a flagrant foul after he smacked Nowitzki in the face as he drove to the basket. The Mavericks retaliated early in the fourth quarter by sending their goon, Eduardo Najera, to rough up Manu Ginobili, who was already nursing a broken nose he sustained from Game 3.

Najera attempted his best MMA move by pulling Ginobili around his neck and shoulders and throwing him down to the ground. The flagrant foul got Popovich and the Spurs riled up and Najera was immediately ejected from the game and could draw a one-game suspension or fine.

Dallas coach Rick Carlisle defended Najera’s actions and even vowed to use him more because the seldom-used veteran forward is one of the few Mavericks who can match San Antonio’s physical approach. 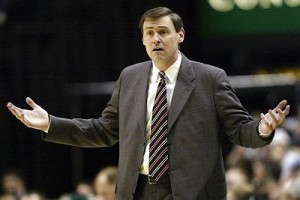 Dallas coach Rick Carlisle says his Mavericks needs to be more aggressive against the Spurs.

“We may have to look at playing Najera a little more. He was in there for a short period of time and he made an aggressive play at least,” Carlisle told reporters during a postgame news conference.

“We had seven points and seven rebounds, and a lot of it happened when [Najera] was on the floor.”

When Carlisle was asked how the Mavericks lost the game, he replied: “When you get another guy who goes 11-for-16 and hits five threes, it can easily happen. And if you additionally get your ass kicked on five to seven loose-ball plays, that is certainly going to contribute to losing.”

The “guy” Carlisle was referring to was San Antonio’s George Hill, who pumped in a playoff career-high 29 points to help lead the Spurs to a 92-89 win in Game 4.

The Dallas-San Antonio matchup has grown into one of the best rivalries in the NBA, and Carlisle feels that his team has not matched the Spurs’ intensity in this first-round series.

“There were a set of plays especially in the last couple of games where we have to get down and dirty. We gotta come up with balls that are 50-50 balls. That is sort of the game being won and lost in the trenches,” said Carlisle, whose No. 2-seeded Mavs are down 3-1 to the No. 7-seeded Spurs.

“There’s a number of plays where we’ve got to become the aggressor on. They’ve done a very good job of deflecting balls in the series. The key thing is playing out of flow, and we’re not necessarily calling plays. We’ve got to get into situations quickly,” Carlisle explained. “When the ball starts moving around in the perimeter versus their rotations, we’ve got to make quick decisions and make plays.”

How do the Mavs adjust?

“I’ve got to look at the film and evaluate that. Making lineup changes is something you can always do. But I don’t necessarily know that is where things are at,” Carlisle said. “We’ve got to this point with a good seed in the playoffs by playing our style and doing it well. We’re just going to have to work at doing it better.”