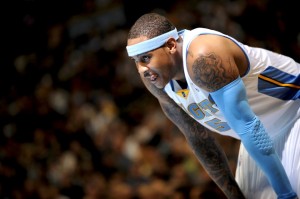 Carmelo Anthony is reportedly unhappy with his situation with the Nuggets and is considering a move elsewhere. (2KSPORTS)

Carmelo Anthony is considering a move to New Jersey, that is according to reports by ESPN and Yahoo! Sports. The deal reportedly involves Nets first-round pick Derrick Favors, some expiring contracts and draft picks.

If those reports are accurate, and they all seem to be building up steam, then the Denver Nuggets could be well on its way out of the playoff picture in the Western Conference; not only this season for years to come. Anthony is a franchise player in the Association, and you’re not going to get fair market value unless you get another All-Star in return. In this case, the Nuggets are banking on that Favors will be a starter (which is still unknown) and hope that those draft picks can land them a young stud to build around for the future. Based on those uncertainties, the Nuggets will languish in mediocrity until they find a suitable replacement for Melo.

Anthony seems to be unhappy in Denver. During the Nuggets’ disappointing playoff series against Utah, Anthony expressed his frustrations publicly. ““I’m trying to do everything I can in my power to beat the Jazz. But, at the end of the day, I need some help,” said Anthony, who scored a game-high 39 points in Denver’s 117-106 loss in Game 4, but the rest of his team managed just 67 points.

Anthony added: “I’m not sitting here pointing fingers, but as a unit we gotta do this together. I can’t do it by myself. I’m frustrated at the level of play. The energy, the intensity is not there. We start off the game good, then for some reason we’re down 10 or 11 points. You know, [Carlos] Boozer down there is pushing our big men out of the way.”

Without naming names, Anthony’s piercing criticism were directed at his big men: Nene, Kenyon Martin and Chris Andersen. All three were thoroughly outplayed by the Jazz big men, including little-used center Kyrylo Fesenko.

“Fesenko … Fesenko! I mean don’t get me wrong he’s playing extremely well,” Anthony said, “he’s playing with a lot of confidence. But … Fesenko!”

Even though he’s not on the same level as Kobe Bryant, Kevin Durant, Dwyane Wade and LeBron James, Anthony is a legitimate superstar; one of the 20 best players in the league. He is almost 30% of Denver’s offense and his impact on the floor is hard to duplicate. The Nuggets reached the conference finals with Anthony and Chauncey Billups leading the way. Without Melo, the 34-year-old Billups will be hard-pressed to shoulder the load by himself.

A number of others teams, including the Knicks, Bulls, Rockets, Clippers and Warriors, have been pursuing Anthony as well. However, sources on several of those teams were pessimistic that they could match what the Nets have to offer.

After watching how James and Chris Bosh devastated Cleveland and Toronto, respectively, by leaving without much compensation, the Nuggets are determined to get something in return for Anthony. Nuggets general manager Masai Ujiri just lived through the Bosh saga as a member of Toronto’s front office before taking the Nuggets job.

Anthony has basically ignored Denver’s offer of three years, $65 million all summer, a sure-fire sign that he has decided that Denver is not in his future and would prefer to play elsewhere.