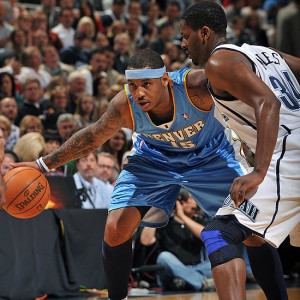 Carmelo Anthony and the Nuggets are down 3-1 to the Jazz in their best-of-seven first-round series. (NBAE/GETTY IMAGES)

The Denver Nuggets, a team that started the season with hopes of challenging the L.A. Lakers in the Western Conference and winning a NBA title, are on the brink of elimination in the first round.

Denver is down 3-1 to the Utah Jazz and the pressure of getting bounced early in the playoffs has the Nuggets, including their best player, extremely frustrated and edgy.

Carmelo Anthony admitted after the loss in Game 4 that his teammates need to raise their level of play or they’re all making reservations in Cancun or Cabo next week.

“I’m not sitting here pointing fingers, but as a unit we gotta do this together. I can’t do it by myself,” he continued. “I’m frustrated at the level of play. The energy, the intensity is not there. We start off the game good, then for some reason we’re down 10 or 11 points. You know, [Carlos] Boozer down there is pushing our big men out of the way.”

Without naming names, Anthony’s recent criticism were directed at his big men: Nene, Kenyon Martin and Chris Andersen. All three have been thoroughly outplayed by the Jazz big men of Carlos Boozer, Paul Millsap and Kyrylo Fesenko.

“Fesenko … Fesenko! I mean don’t get me wrong he’s playing extremely well. He’s playing with a lot of confidence. But … Fesenko!” Anthony said about Utah’s seldom-used second-year center who was forced into action when Mehmet Okur went down with a season-ending Achilles’ tear.

“They got everything they wanted out there. You know, transition buckets, paint points,” Anthony said of the Jazz, who have won three games in a row after dropping the first game in the series.

“[Wesley] Matthews gave them a huge lift, taking advantage of us trying to keep [Carlos] Boozer and Deron [Williams] out of the game. He knocked down some shots and opened it up for them.”

Matthews, a rookie guard, is the son of former NBA player Wes Matthews. He is averaging 11.3 points per game in 37 minutes and is one of the players assigned to guard Anthony.

Anthony’s frustration reached a boiling point when he had an animated discussion with Andersen at the end of the first half near the bench area.

“I don’t want to point fingers at Birdman, but it was just that one shot,” Anthony explained. “I never have a problem with guys taking shots, but at that point and time of the game that shot wasn’t the right shot for us. All I told him was ‘We didn’t need that shot.’  We talked it over at halftime, I gave it to him clear what I was trying to say, and he understood.

“I’m in a battle. I don’t have time to worry about people’s feelings right now.”

Anthony made 13 of 26 shots from the field and grabbed 11 rebounds in Game 4, but he did have a game-high nine turnovers, a clear indication that he was doing too much and was getting fatigued.

“I tried. I did everything to win the game If I could do it by myself I would,” Anthony said. “I just don’t want them – them, my teammates – to give up. We’re definitely in a dogfight.”