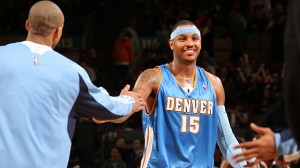 All-Star forward Carmelo Anthony is still a member of the Denver Nuggets. But for how long? (GETTY IMAGES)

The proposed deal by Nets general manager Billy King that would send All-Star forward Carmelo Anthony to New Jersey was not accepted by the Denver Nuggets, according to NBA front-office informed sources.

Online betting fans should take into consideration that Anthony is one strong candidate to win the regular-season MVP, while Kevin Durant and Kobe Bryant are two other big favorites.

The Utah Jazz and the Charlotte Bobcats were the other teams involved in the trade. However, sources close to the situation said that the Nets were no longer prepared to wait for a decision, and due to this the four teams involved are now concentrating on the work of their respective training camps.

Also, it has been reported that King had given the Nuggets until last Tuesday to finally accept or reject the original offer, which would have also brought Jazz veteran Andrei Kirilenko, Nets rookie Derrick Favors, and two future first-rounds picks to the Nuggets.

For his part, Nets first-year coach Avery Johnson said that Favors has not been distracted by the conversations of the trade.

“Favors has been one of our best players so far,” Johnson said. “He’s doing a nice job.”

In addition, the negotiation included players such as guard Devin Harris, who would have gone to the Bobcats, and forward Boris Diaw, who would have been traded to Utah.

The Nets could try again in the future to obtain Anthony with a more attractive financial offer for the Nuggets, including the participation of other teams.

Nuggets coach George Karl, a big supporter of the continuity of Anthony on the team, gave him an “A” for the effort and professionalism shown after practice.

This latest opportunity may have closed for Anthony, but it won’t be the last time we’ll hear trade talks involving the Nuggets forward.