Delonte West returned to the court on Saturday night, and it’s not the court where a jury decides his fate.

This time, the only people who were judging West were the 20,000 Cavaliers fans in attendance at Quicken Loans Arena in Cleveland, and they delivered an uplifting verdict to the troubled Cavaliers guard.

West scored 13 points in 24 minutes off the bench in Cleveland’s 90-79 victory over the Bobcats, all of them coming in the second half when he finally got rid of the rust. It was his first game back since getting arrested in September on weapons charges. 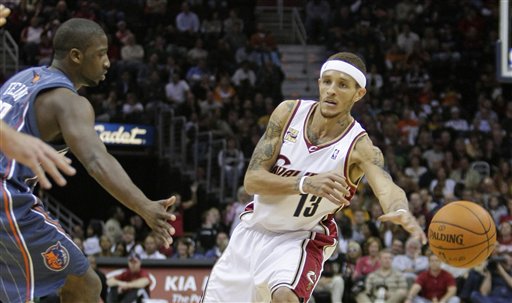 Cavaliers fans were not the only ones who were happy to see West back on the court.

LeBron James was glad to have West back in the rotation because he knows the 6-3 guard is a key player in the Cavaliers’ hopes of winning an NBA title.

And if there were any concerns if West was going to disrupt the flow of the team, James said, “I have said this before, Delonte is one of those guys who doesn’t need to do anything. He can sit out for two weeks, he comes back in and he’s right in the flow. He’s just that type of guy.”

James also noted that the reaction of the fans is something that can have a lasting impact on his teammate’s confidence.

“We’ve got great fans,” James said. “They get behind whoever is part of this team. That was great for Delonte the fans did that for him because they didn’t have to do at all.”