McHale pointed out that power forward Anderson Varejao does not have the shooting range to stretch a defense, and because of this the Cavaliers are having a hard time stretching the defense and their first two opponents – Boston and Toronto – basically packed the paint. Both teams were daring Varejao to beat them from the outside and Varejao did not make enough shots to force the Celtics and Raptors to adjust their defense. 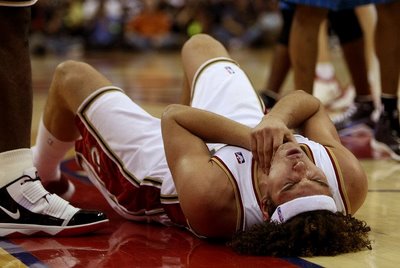 McHale explained that Varejao is not a pick-and-pop player. He’s more a pick-and-roll guy, and when he dives to the basket he ends up clogging the lane with Shaq.

Throughout his career, O’Neal has played with forwards who can make an 18-footer: Horace Grant, Robert Horry and Udonis Haslem. When O’Neal was in Phoenix, he ran into the same issues with Amare Stoudemire. Stoudemire prefers to roll the basket instead of popping out to the top of the circle, creating a logjam in the 3-second area.

In their two losses, the Cavaliers shot just 37% and have yet to score more than 92 points. For O’Neal to be effective in their offense, the Cavs need a 4-man who can consistently make jump shots.

The bottom line is, Varejao and Shaq can’t be on the court at the same time.