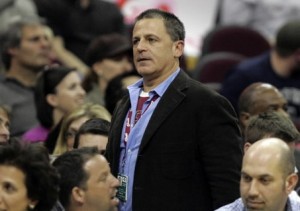 There is a lot of smoke emanating from northeast Ohio. Irate Cavaliers fans are burning LeBron James jerseys and T-shirts, and there is steam coming out of Dan Gilbert’s ears.

The Cavaliers owner was absolutely livid, and rightfully so, when James went on national TV Thursday night to tell the whole world that he is ditching Cleveland for Miami.

“In this fall … man, this is very tough … I’m going to take my talents to South Beach and join the Miami Heat,” James told Jim Gray during a one-hour made-for-TV event televised live on ESPN.

“That was the conclusion I work up to this morning,” James said. Then, he explained, “I feel like this is going to give me the best opportunity to win, and to win for multiple years. And not only to win in the regular season and to win five games in a row or three games in a row, I wanted to be able to win championships and I feel like I can compete down there.”

As soon as LeBron uttered the words “Miami” and “Heat,” Cavaliers Nation fell hard. It must have felt like someone had just punched them in the gut and then kicked while they were down. Or, better yet, Cavs fans now know it feels to get dumped in public, have beer poured over your head and watch your ex leave the bar with a hot-looking chick who barely speaks English. Cleveland just got bamboozled by one of their own, a guy who they have worshiped and revered since he was 16 years old.

Hours after the devastating announcement, Gilbert wrote an open letter to Cavaliers fans and posted it on the team’s Web site. Gilbert wrote:

“As you now know, our former hero, who grew up in the very region that he deserted this evening, is no longer a Cleveland Cavalier.

This was announced with a several day, narcissistic, self-promotional build-up culminating with a national TV special of his “decision” unlike anything ever “witnessed” in the history of sports and probably the history of entertainment.

Clearly, this is bitterly disappointing to all of us.

The good news is that the ownership team and the rest of the hard-working, loyal, and driven staff over here at your hometown Cavaliers have not betrayed you nor NEVER will betray you.

There is so much more to tell you about the events of the recent past and our more than exciting future. Over the next several days and weeks, we will be communicating much of that to you.

You simply don’t deserve this kind of cowardly betrayal.

You have given so much and deserve so much more.

In the meantime, I want to make one statement to you tonight: “I PERSONALLY GUARANTEE THAT THE CLEVELAND CAVALIERS WILL WIN AN NBA CHAMPIONSHIP BEFORE THE SELF-TITLED FORMER ‘KING’ WINS ONE”

You can take it to the bank.

But Gilbert didn’t stop there. He continued to blast the self-proclaimed “King James,” telling the Associated Press that James showed his true colors Thursday night and claimed that he “quit” on the Cavaliers during Games 2, 4, 5 and 6 in the 2010 Eastern Conference semifinals against the Boston Celtics.

“Watch the tape,” Gilbert said. “The Boston series was unlike anything in the history of sports for a superstar. People have covered up for him for way too long.” 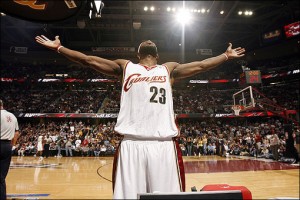 Then, taking a page out of Stephen King’s made-into-movie novel “Thinner,” Gilbert slapped the “Curse of White Man from Town” on James and promised that the “Cleveland Curse” has now been lifted because James will be carrying that hex with him to South Beach.

“The good news is that this heartless and callous action can only serve as the antidote to the so-called ‘curse’ on Cleveland, Ohio,” Gilbert said. “The self-declared former ‘King’ will be taking the ‘curse’ with him down south. And until he does ‘right’ by Cleveland and Ohio, James (and the town where he plays) will unfortunately own this dreaded spell and bad karma. Just watch.”

Should LeBron be concerned about a curse? Maybe not right now, but the minute the Heat start losing multiple games, James’ knees and elbows mysteriously begin to swell and his highlight-reel moves turn into an episode of “Bloopers & Practical Jokes,” then maybe he should seriously consider drawing blood from his hand and dripping it into a plate of strawberry pie. Or, he could just hire some guy named Richie “The Hammer” Ginelli to do the dirty work for him.

Growing up in nearby Cleveland, James should be well versed in the sad, sad history of professional sports teams in Ohio. Whether it’s bad luck or simply cursed, Clevelanders have endured many, many heartbreakers: The Drive, The Fumble, The Shot Over Ehlo, The Indians’ Ninth-Inning Collapse in the 1997 World Series, and now The Betrayal.

Those who are close to James say that the two-time NBA MVP painfully wrestled with this decision for months, but ultimately he simply could not pass up an opportunity to play with his good friends and Olympic teammates Dwyane Wade and Chris Bosh in Miami.

Wade says the Heat now have a huge bulls-eye on their back, while James has become public enemy No. 1 to 29 teams in the league.

Bulls fans despise him, Knicks fans will treat him like he’s Reggie Miller and boo him profusely when shows his face at Madison Square Garden, and his cronies may have to pay their way to watch Jay-Z’s concerts from here on out.

And then there is Cleveland. James should seriously consider moving his whole family out of Akron and into South Beach because it’s no longer safe to live in his hometown. The people of Cleveland, Ohio, have already severed ties with LeBron and vilified him as the 2.0 version of Art Modell. LeBron James has become LeBart Modell.