Doc Rivers has maintained since April that, at some point during the postseason, Nate Robinson was going to win a playoff game for the Boston Celtics.

The Celtics coach proved to be prophetic as Robinson got his opportunity in Game 6 of the Eastern Conference finals and delivered a superlative game off the bench that catapulted the Celtics to a series-clinching 96-84 victory and a trip to the NBA Finals.

Robinson – the 5-foot-9 three-time slam dunk champion who was acquired by the Celtics from the New York Knicks during the trade deadline – led a Boston second unit in the second quarter that pushed the Boston lead from 11 to 21 points. He scored 13 points in nine minutes and made two huge 3-point shots that not only got the crowd excited but inspired his teammates. 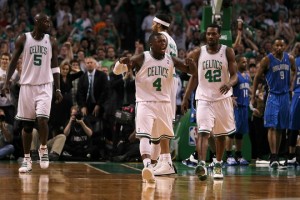 Nate Robinson provides a big lift for the Celtics in the second quarter of Game 6 in the Eastern Conference finals. He scored 13 points, including two crushing 3-point shots. (NBAE/GETTY IMAGES)

“They actually made their big run with Rondo sitting on the bench,” said Magic coach Stan Van Gundy. “That’s not a knock on Rajon Rondo. I’m not sitting up here saying they’re a better team without Rajon Rondo. But tonight they were.

“Nate Robinson was great. He’s a real talented guy,” Van Gundy added. “He scored a lot of points in New York, and what he did tonight was probably what they had in mind when they made the deal. I guess, for whatever reason, he hadn’t played much for them. But in an absolutely huge game he stepped up and played great.”

Paul Pierce, who led the Celtics with 31 points and had 13 rebounds, credited Robinson for sticking to the script and staying sharp despite the limited action.

“He kinda fell off the rotation, but my hats off to him because usually young players mentally fall out of it when they don’t play, just go through the motions in practice and really not into it because they’re worried about their time. That’s normal for a young player,” Pierce said of Robinson, who turns 26 this month. He had averaged just five minutes of court time in this year’s playoffs.

“But he kept his poise. He went to practice and got his work in, shot the ball, and did what he had to do to stay ready. Tonight his number was called and that just shows his true professionalism,” Pierce continued. “The game could have went either way at that point. We were only up by six or eight [points] and Rondo gets hurt, and he comes in and was a huge sparkplug, and really pushed the game for us.”

Rivers noted that he had already decided to give Robinson more playing time for Game 6 after he played well during the Game 5 loss in Orlando, and it became absolutely necessary when Rondo hurt his hip during the first quarter. “Even though we had played awful, [Robinson] came in and had bought into our defensive system and he was able to run a couple of sets in our system,” Rivers said.

Robinson carried over his solid Game 5 performance with an ever better one in Game 6. He was aggressive on offense and, more importantly, applied heavy pressure on Magic point guard Jameer Nelson, who struggled to a 5-for-14 evening and had just 11 points.

Orlando fought valiantly in this series and Rivers credited Van Gundy for keeping his team together even when most people had already counted them out when they fell behind 0-3.

“We got away from our game when we got behind. Unfortunately, it happens to every team. When we missed shots early, we didn’t stick with our game,” said Van Gundy, who pointed out that the first quarter was the key to the whole series.

“There’s this thing that people try to perpetuate that the NBA is fourth-quarter league, and you don’t even need to watch the first three quarters. That’s for people who don’t study at all and don’t follow NBA basketball. Go back through the years, two thirds or three quarters of the games are won by the team that wins the first quarter. It’s a first-quarter league. You gotta be ready at the start.”

The Magic fell behind 30-19 in the first quarter and played uphill the rest of the game.