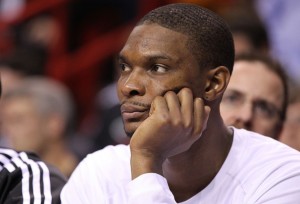 Chris Bosh on the court is all about finesse, but the Miami Heat star rolled up his sleeves and flexed his muscles on Wednesday by responding to the verbal jabs from ESPN’s Skip Bayless.

For much of last season Bayless took shots at Bosh’s “soft” game and subpar performances by calling him Bosh Spice, suggesting that the 6-foot-10, 235-pound forward plays more like one of the Spice Girls.

Bosh, while sitting across from Bayless on the ESPN First Take debate desk, revealed that he personally didn’t have a problem with his TV critic, even calling Skip a “professional.” However, Bosh did admit that the not-so-flattering nickname irked him a bit.

“My only problem is just the whole misuse of the name,” Bosh said. “If I stink it up on the court that’s fine, I don’t have any problems with you. I love jokes. I love cracking jokes. My thing is, my family, we take a lot of pride in our name. My ancestors, my great grandfather, my father, my grandfather, my aunts and uncles, we’re very prideful with the Bosh name and I don’t like it being made fun of. And I don’t think they appreciate it either. That’s all.”

Bosh added, “You know, the Bosh name, that’s all we have. We’re hard-working guys. My father and his father, they paved the way to do what I’m doing today. That’s my main issue.”

To Bayless’ credit, he did not back off the Bosh Spice comment and explained to Bosh, face to face, why he came up with the nickname. “I respect the Bosh name,” Bayless said, “but I have no regrets by referring to you occasionally, especially early and at midseason, as Bosh Spice.”

Bayless continued, “I admit I was very tough on you but I thought that your performance with the Miami Heat, the Heatles, warranted an occasional use of that nickname. I thought it was fitting and accurate because occasionally early on with this team I thought you were soft and passive and unaggressive. And [Bosh] always had the power all year long to defend the Bosh name, you can shut me up at any time by simply performing and ultimately in the postseason you didn’t hear me calling you Bosh Spice anymore.”

Bayless reasoned that because Bosh chose to leave the media-friendly confines of Toronto for the red-hot spotlight in Miami that he instantly became an easy target, along with his Heat teammates LeBron James and Dwyane Wade. Bayless hammered the point that the Heat brought the heavy scrutiny to themselves with the team’s over-the-top preseason celebration and LeBron’s infamous boast that the Heat will win “not three, not four, not five, not six, not seven” championships.

Bayless pointed out one game against the New Orleans Hornets early in the 2010-11 season in which Bosh recorded one rebound in 34 minutes, and the next day Bayless slammed that weak effort and started calling the Heat forward Bosh Spice.

Normally, whenever athletes are verbally attacked like this, they jump out of their chair and threaten physical harm to reporters (are you listening Bobby Bonilla and Jim Everett?). But Bosh took Bayless’ stab and even admitted that the stinging criticism gave him a lot of motivation the rest of the season.

“I feel like I could have played a lot better. I’m my harshest critic. I just want to make sure everybody knows that,” Bosh said. “There’s nothing anybody can say that I haven’t heard.

“I don’t like the [Bosh Spice] reference, but I can’t say anything about the performance.”

The biggest revelation from the Bosh-Bayless debate was the fact that athletes, as much as they deny it, are affected by what reporters, columnists, analysts and fans say about them. Whenever you hear or see an athlete say he doesn’t hear the criticism, that’s a complete lie. They do listen and are not immune to it just like everyone else. Athletes are extremely sensitive. The majority of them have been coddled for much of their lives and any little negative feedback is met with anger, disappointment and disgust.

In Bosh’s case, he faced one of his “haters” and defended his position without getting confrontational. He gave a very intelligent response and even won over Bayless at the end as the Diabolical Hater hinted that he may pick the Heat to win the NBA championship next season . . . if there is a 2011-12 season.