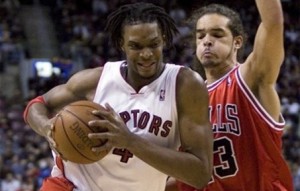 Bosh and Wade confirmed that report with PTI’s Michael Wilbon just a few hours later, forming a dynamic duo in Miami with room for possibly another superstar with the initials LBJ, who is expected to make his announcement on ESPN Thursday night, to join the Super Crew in South Beach.

Terms of the deals have yet to be determined and it is unknown whether Bosh will come to Miami via a sign-and-trade with the Toronto Raptors. The only thing certain is that he’ll be wearing the Heat uniform when the 2010-11 season arrives.

“I’m joining Mr. Wade in Miami,” Bosh said. “I think we’re both fine with the situation. We’ve wanted to play with each other and we have a golden opportunity to do that.”

Bosh, 26, had been courted by several other teams, including Houston, Dallas, New York, Chicago and Cleveland. The Cavaliers made a last-ditch effort to do a sign-and-trade with the Raptors.

James reportedly tried to lure his good friend Bosh to play with the Cavaliers, but the 6-foot-11 power forward/center had other ideas, and one of them was playing in a star-friendly city such as Miami where he could also play with another superstar in good friend.

“There’s no secret that Chris, myself and LeBron are all good friends. We all came into the this league together,” said Wade, 28, who was drafted by the Heat in 2003, the same year James and Bosh entered the NBA.

“We all make our own decisions at the end of the day,” Wade said. “Of course, we would love for LeBron to join us in Miami. Who wouldn’t? But, at the same time, LeBron is going to make his own decision.”

Both Wade and Bosh said they are willing to take less money to give the Heat more flexibility to sign other players and give the Heat a more formidable roster to compete for a championship.

“I expect us to compete for a championship,” Bosh said. “Both Dwyane and I wanted an opportunity where right away we’ll be competing. We’re ready sacrifice some of the other things in order to do that. It’s not about the money. It’s not about anything else except for winning. I’m a winner, Dwyane’s a winner, and we’re gonna bring winning to Miami.”

Bosh did not confirm nor deny reports that he did not want to play in Cleveland, instead he deferred the question to his agent Henry Thomas, who is also Wade’s agent. But Bosh did say that James’ indecision led to his decision to play with the Heat.

“I wasn’t sure if LeBron was coming back,” Bosh said. “I just wanted to leave that decision up to him. I wanted to choose the best situation for me and my family, and Miami was the best decision for me.”

As for the possibility of James joining them in South Beach?

“I’m gonna let him do his thing,” Bosh said. “I’m not going to mess with him. He’s got enough people in his ear. Good luck, LeBron.”