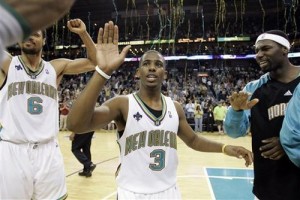 NBA TV is currently airing a show titled “24 Hours with …. Chris Paul.” It shows a very revealing look at the life of an NBA star, from the time he leaves his home to attend practice, to his game preparation and then back home again to recharge and deal with family life.

Last year, he missed most of last season with an injury and a lot of pundits elevated guys such as Deron Williams, Rajon Rondo and Derrick Rose to the top of the point guard competition.

Well, the king is back and he wants his crown back.

D-Will is nice, but he doesn’t have CP3’s ball-handling and passing skills. Rondo is an amazing passer, but he can’t score like Paul can. And D-Rose may be the quickest PG in the NBA, but he still has a long ways to go in terms of managing a game and running an offense.

Chris Paul is the most complete point guard in the league, and if there were any questions regarding his status as the top guard he has certainly answered the call with the way he has played during the first two weeks of the 2010-11 season.

Paul has the Hornets buzzing again, sitting atop the Southwest Division at 6-0. The Hornets are one of three undefeated teams in the Association and one of their wins came against Eastern Conference power Miami. Against the Heat, Paul had 13 points and 19 assists and powered the Hornets to a 96-93 victory at home. It was New Orleans’ signature victory of the young season, and the team owes it all to its perennial All-NBA performer.

“We just got to keep playing, man. I’m not surprised just because we’re all professionals,” Paul told the Associated Press. “It doesn’t matter what it looks like on paper, you just have to go out and play the game and that’s what we’re doing.”

The Hornets are off to the best start in their history, but it depends on how this season ends that could decide what Paul will do in the offseason. He will become a free agent after this season and the Hornets are caught in a LeBron-like situation. They could very well lose Paul without any compensation (sound familiar), which would likely end basketball in New Orleans.

Paul said publicly during the offseason that he wants to play for a championship and he’s getting a little frustrated with the direction of the franchise. Then he saw his good friend LeBron James jump ship and join forces with Dwyane Wade and Chris Bosh in Miami, so that got his blood boiling even more.

That was before Paul met with Monty Williams, a young and bright assistant coach who was hired last summer to be the head man of the Hornets. Williams has convinced Paul that things will be different, and so far he has delivered on his promise.

The Hornets are playing with more energy and their defense has been superb. Also, offensively, Emeka Okafor and David West have benefited greatly from Paul’s return and the addition of Trevor Ariza has given the team a versatile player who can score and defend at the wing position.

“It’s nice to be part of a group who plays hard every night. Different guys are stepping up. The start is great, but we are going to win a lot of games if we play defense like that,” said Williams, who worked as Nate McMillan’s assistant coach from 2005-10 so he knows a thing or two about playing defense. He also played for Gregg Popovich so he puts a premium on stability and organization.

Seems as though Paul has bought into Williams’ philosophies and things are looking up. Their relationship will ultimately determine whether the New Orleans Hornets will be a perennial playoff team or a franchise that could be contracted.