Blake Griffin, welcome to the club.

Even before the Los Angeles Clippers could put on their headbands and lace up their sneakers, they were greeted with devastating news when prized rookie, the No. 1 overall pick in the 2009 draft, Blake Griffin was found to have a stress fracture in his left knee and the injury will sideline him for at least six weeks.

Unbelievable. Griffin was suppose to inject some much needed boost to a sagging franchise and he is rendered helpless with this latest setback. 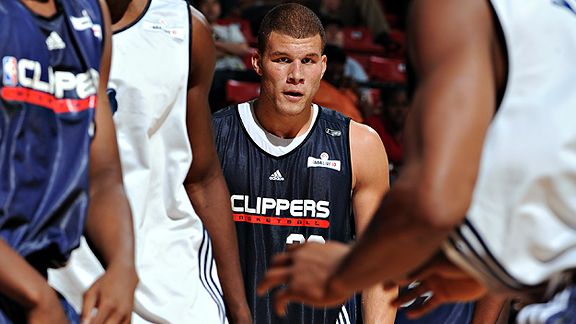 Rookie Blake Griffin is out six weeks because of stress fracture on his knee.

The Clippers have had the misfortune of seeing their franchise players go down with injuries. Danny Manning, the No. 1 pick in 1988, injured his knee while with the Clips; Ron Harper, a player once called “a poor man’s Michael Jordan,” wrecked his knees when he was with the Clippers; and Shaun Livingston, a high schooler who was tabbed as the future point guard of the Clippers, suffered a devastating knee injury that is threatening his career.

Manning blew out his knee in his rookie season while going for a layup. Though he had a decent NBA career, his knee injury altered his game and some felt he was never the same player after the injury.

Terry Cummings, the team’s No. 2 overall pick in 1982, did not suffer an knee injury but he was diagnosed with a heart arrhythmia, a potential fatal disease. Cummings was able to overcome that and posted a decent NBA career.

Livingston suffered the ugliest injury of all. In a game against Charlotte in February of 2007, Livingston went up for a layup and his knee simply gave out. It was later discovered that he tore three of the four ligaments in his left knee and it has taken him two years just to get back on the court. He has played in 12 games since the injury.