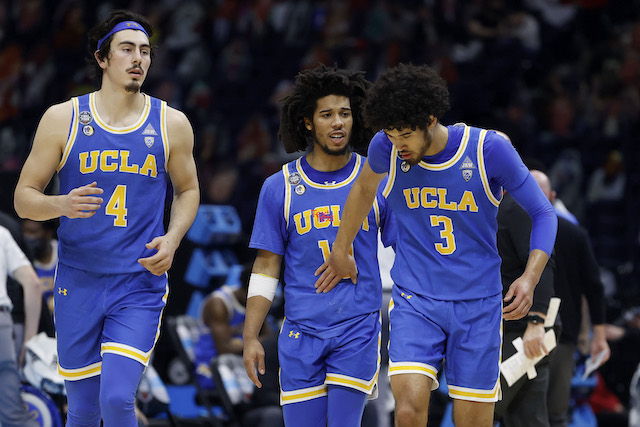 It took one of the all-time great Final Four buzzer-beaters to eliminate the UCLA men’s basketball from the 2021 NCAA tournament. Jalen Suggs’ near-halfcourt bank shot in overtime lifted top-seeded Gonzaga to a 93-90 victory over 11th-seeded UCLA in the national semifinals. Suggs’ “banked robbery” (a great headline from the Los Angeles Times) ended one of the greatest tournament runs in recent memory. Basketball pundits were shocked how far the Bruins went in March Madness.

But was it really that shocking? If you ask the majority of experts, it was. But if you look under the hood, it should have been expected.

UCLA made the Final Four after beginning the tournament in the First Four, becoming the second team to do so. Tyger Campbell, Jaime Jaquez Jr. and Johnny Juzang became instant March Madness stars. The Pac-12 put four teams in the Sweet 16, and three reached the Elite Eight. Those teams finished with 11 more wins than the seeds would have projected. Oregon State, USC and UCLA advanced to the regional finals. USC — led by potential 2021 NBA lottery pick Evan Mobley — eliminated Oregon in the Sweet 16.

The Big Ten, on the other hand, had one of the all-time faceplants by a conference. Rarely has a league been so well-positioned to have a big tournament, yet it still fell flat. Of the five teams seeded to make the Sweet 16, only one advanced to that round. Good performances by the lower-seeded teams in the Big Ten helped to save a little face. Still, Big Ten teams won eight fewer games than expected. The Big Ten is now the first league to put more than seven teams in the tournament and finish below .500.

It was not a great year for the ACC, either, which got two wins each from Florida State and Syracuse but saw the other five teams lose in the first round. The league’s 4-7 mark ties the Pac-12 in 2016 for the worst record for a conference with at least seven teams in the tournament. Despite that poor performance, the ACC kept alive its streak of putting at least one team in the Sweet 16 every year since 1980. The second-longest such streak belongs to the Big 12, which goes back to 1999.

For the third year in a row, Kentucky and Duke have the most active players around the NBA. From the opening day rosters in the 2020-21 season, Kentucky led the way with 32 players on NBA rosters followed by Duke at 29. The next-best college program was North Carolina with 13. Yes, the ACC and SEC still dominate the league when it comes to producing NBA talent. But the Pac-12 is on par with the conference blue bloods in terms of being a pipeline for the NBA. And you can make a strong case that the Conference of Champions (as Bill Walton likes to refer to it) is just as good if not better than the SEC or the ACC at producing NBA All-Star talent.

Here are some notable active NBA players and which conferences and schools they came from.