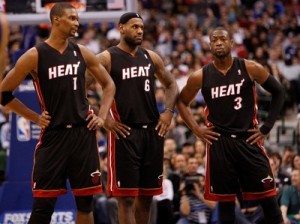 Miami Heat head coach Erik Spoelstra admitted after Sunday’s 87-86 loss to the Chicago Bulls that some of the players in the Heat locker room were crying.

Seriously? Crying after a regular-season loss? Crying after dropping from the second spot in the Eastern Conference to the third spot? Was there a trophy involved? Did the Heat get eliminated from playoff contention? This is unbelievably childish. The Heat treated the loss to the Bulls as if some schoolyard bully just shoved them to the ground and stole their lunch money.

“The Miami Heat are exactly what everyone wanted, losing games,” Wade said after getting swept by the Bulls for the season. “The world is better now because the Heat is losing.”

That statement from Wade paints a clear picture of the current state of the Heat, and it explains what is wrong with the team. Basically, they are kicking, screaming and pouting like a petulant child who can’t handle the pressure of the situation.

Spoelstra’s extremely fragile squad, with a mental toughness of a 7-year-old, is now 0-9 against the top teams in the league and mired in a four-game losing streak. Miami is struggling mightily at the end of games. In games decided by three points or less, when the game is on the line in the final 10 seconds, Miami’s self-proclaimed Three Kings – LeBron James, Dwyane Wade and Chris Bosh – are a combined 1-for-18 from the field.

Just in the last few weeks, LeBron had the game in his hands with time winding down, but he came up short each time.

In Feb. 24 at Chicago, James completely missed the rim on a 3-point attempt. In a prime-time showdown against the new-look New York Knicks, James drove to the basket and got denied by Amare Stoudemire. A week ago at home against the Orlando Magic, the Heat blew a 24-point lead and Bosh and James both missed wide-open 3-pointers at the end. And then came Sunday’s showdown with the Bulls. James had the ball at the top defended by Joakim Noah. James drove to his left, his strong side because he’s a natural lefty, and inexplicably short-armed a shot. It looked like LeBron couldn’t decide whether to power up for a layup or throw a half hook. Then, Wade gobbled up the loose ball and had a chance to save his friend, LeBron, but Wade missed from the baseline.

The Heat have lost its confidence, clearly. They are also in a state of shock that things are not going as planned. They were already planning a championship parade back in July when LeBron and Bosh came on board. LeBron promised to unleash hell on all the “haters” and Wade spoke about how they were going to “dominate” during the season, and there were even talks of a 70-win season.

Well, when you talk the talk you better be ready to walk the walk. The Heat were thumping their chests and boasting about their intentions when, in reality, they haven’t accomplished anything.

James has been to one NBA Finals and got swept, and his Cleveland teams were favored to reach the Finals the last two seasons and failed both times – losing to Orlando in 2009 and then to Boston in 2010. Bosh has never played in a meaningful playoff series, and Wade is still living off his reputation from the 2006 Finals when he had veterans Shaquille O’Neal, Alonzo Mourning, Gary Payton, James Posey and Antoine Walker to lean on.

The big, bad Miami Heat were acting like bullies at the beginning of the season but now they’ve been reduced to crying babies sitting in a corner sulking in their misery.