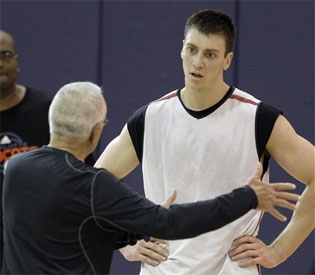 The Indiana Pacers have nothing but great things to say about first-round pick Tyler Hansbrough.

The NBA Summer Pro League is the best place to evaluate a rookie, a second-year player or a developmental league player looking for a guaranteed contract. If a player can survive and thrive in the summer league, they will most likely survive and thrive in the NBA. The summer league is where coaches, scouts and general managers get to see their prized rookies during the controlled scrimmages and find out if they scored a home run or struck out in the draft.

There were a handful of first- and second-year players who stood head and shoulders above the rest. They were (in no particular order):

BLAKE GRIFFIN, L.A. Clippers, PF: Named the most outstanding player of the Las Vegas Summer Pro League. In his summer league debut, the No. 1 overall pick scored 27 points on 11-of-15 shooting from the field and grabbed 12 rebounds. Against the Memphis Grizzlies and their top rookie Hasheem Thabeet, Griffin scored 18 points, grabbed 15 rebounds and lowered the boom on the Griz with three spectacular dunks in the first half. He is the most NBA-ready player from the class of 2009. The 6-10, 250-pound man child from the University of Oklahoma has tremendous bounce off the floor and a terrific athlete for a true power forward. He runs the floor incredibly well and attacks the rim with force. The Clippers are extremely happy to have Mr. Griffin and he should complement second-year guard Eric Gordon and PG Baron Davis.As long as he doesn’t get hurt, Griffin is a lock to be the 2010 NBA rookie of the year. 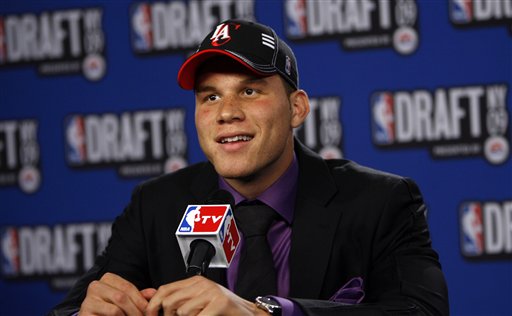 No. 1 overall pick Blake Griffin was named the most outstanding player in the Las Vegas Summer Pro League. (ASSOCIATED PRESS)

RUSSELL WESTBROOK, Oklahoma City Thunder, PG: The second-year point guard was easily the best player in the Orlando Summer League. The former UCLA standout showed great explosion on his dribble drives and finished strong at the rim. Westbrook was paired with rookie SG James Harden and the two lit up the scoreboard and played like vets. After a solid rookie season, Westbrook is primed for a breakout season and validate OKC’s gamble in last year’s draft.

TYLER HANSBROUGH, Indiana Pacers, SF-PF: The Pacers definitely got their money’s worth with this pick. Hansbrough is a coach’s dream, and Coach Jim O’Brien is gushing about his prized rookie. “The first thing that he brings is intensity and an energy level that very few people that I’ve been around in my life can bring to a practice,” O’Brien said of Hansbrough, who was named to the All-Summer League first team in Orlando. 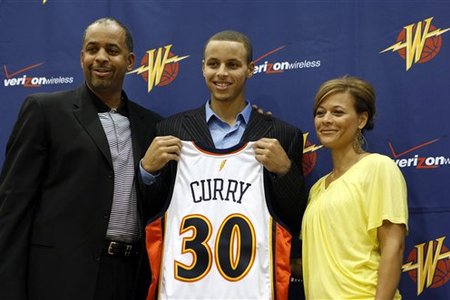 STEPHEN CURRY, Golden State Warriors, PG: The book on Curry was that he is a lights out shooter with a quick release and unlimited range. What the book didn’t say about the son of former NBA sharp-shooter Dell Curry is his court awareness. One scout at the Vegas Summer League said Curry has “super court savvy” and is “deceptively good getting to the basket.” Don Nelson has been able to find gems in the past (Mitch Richmond, Tim Hardaway, Latrell Sprewell, Dirk Nowitzki and Josh Howard) and Curry is no exception. In five games, Curry averaged 17 points and made 10 of 29 3-pointers.

TYREKE EVANS, Sacramento Kings, PG-SG: Whether he’ll end up as a point guard or shooting guard with the Kings, one thing is certain – Evans is a player. At 6-5 and 190 pounds, he has the size and the athleticism to get his own shot, creating a lot of matchup problems against smaller backcourts, and he can defend. He’ll pair up quite nicely with 6-6 SG Kevin Martin. One scout said Evans “looked smooth.” Against the Milwaukee Bucks’ summer league team, Evans poured in 33 points and got to the free-throw line 19 times, converting 17 of them. He also added seven rebounds and seven assists. Now that’s a stat line!

BRANDON JENNINGS,  Milwaukee Bucks, PG: The Euroleague experience has definitely paid off for Jennings. The 6-1 left-hander looks comfortable running pick-and-rolls and his body has matured enough to point where he can get in the painted area, set up teammates or score on his own. He averaged 14.6 points and a summer-league best 8.2 assists. His quick hands were also on display, averaging 3.6 steals per game. Bucks coach Scott Skiles has liked what he has seen so far from his future point guard. Against the Sacramento Kings, Jennings scored 13 points, dished out 14 assists and racked up a summer pro league record seven steals.

ANTHONY RANDOLPH, Golden State Warriors, SF-PF: Another great find by Don Nelson. The versatile forward lit up the Vegas Summer League circuit with a then-record 42 points against the Chicago Bulls. However which way you spin it, scoring 42 points is impressive regardless of the level of competition. Randolph made 13 of 22 field goals and 16 of 21 free throws. When asked about his explosive effort, he said he was disappointed he only got three rebounds.

GEORGE HILL, PG-SG, and DeJUAN BLAIR, PF, San Antonio Spurs: The San Antonio Spurs’ youth movement has officially started. Hill, a 6-2 combo guard with freakishly long arms, is a very steady and very smooth player with the potential to be a lock-down defender for Coach Gregg Popovich. Hill plays under control and his facial expression never changes – it’s the Tim Duncan influence. Blair is playing with a huge cinder block on his shoulders, proving to scouts that he probably should have been taken in the first round instead of the second round. The 6-7, 265-pound former Pitt standout averaged 16.3 points, 8.7 rebounds and shot 53% from the field.

CHASE BUDINGER, Houston Rockets, SF: The former Arizona Wildcat was somewhat of a surprise in the Vegas Summer League. The 6-7 small forward showed he can get his own shot and a quick bounce off the floor. He averaged 18 points a game to lead the Rockets and shot 68% from the field and 94% from the free throw line in five games. Not bad for a second-round pick.

HONORABLE MENTION: Anthony Morrow, Golden State – The undrafted guard from Georgia Tech established a summer league record 47 points against the New Orleans Hornets.  DeMar DeRozan, Toronto Raptors – The one-and-done USC guard-forward was coveted by Toronto from Day 1, and he has not anything to disappoint the Raptors. Rodrigue Beaubois, Dallas Mavericks, G: Mavs owner Mark Cuban calls his outstanding rookie from France “Roddy Buckets.” He had a 34-point game against Houston on July 11. Jodie Meeks, Milwaukee Bucks – Another second-round draft pick who played well in Vegas. The former Kentucky sharpshooter led the Bucks in scoring at 19 per game and made 53% of his 3-pointers. Darren Collison, New Orleans Hornets – Hornets coach Byron Scott loves the way Collison plays the game: hard and fast. Jonny Flynn, Minnesota Timberwolves – Not the top guard in the Vegas Summer League, but showed he can handle the point. James Harden, Oklahoma City Thunder – Surprisingly athletic and has the ability to put the ball on the floor and create shots for himself.