Who says there is no more loyalty in sports? Two very important role players on teams with championship aspirations each re-signed with their respective teams on Monday. Derek Fisher, a five-time NBA champion with the Los Angeles Lakers, will remain a Laker for at least three more years while Udonis Haslem, a member of the 2006 Heat championship squad, spurned better offers from Denver and Dallas and will re-sign with the Heat.

After a weekend blanketed with news of free-agent superstars ditching their old teams for greener pastures, it was somewhat refreshing to see that there’s still some loyalty left in sports, and Fisher and Haslem proved there is no place like home.

L.A. has been Fisher’s home for 11 of his 14 seasons in the NBA. He was drafted by the Lakers in 1996, and after a brief three-year hiatus, he rejoined the club in 2007 and the Lakers have made three consecutive trips to the NBA Finals since his return. Life without Fisher would have been extremely difficult for the Lakers, especially for Kobe Bryant, who calls the 36-year-old guard the “emotional and vocal leader” of the Lakers. 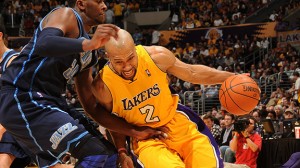 Derek Fisher will return to the L.A. Lakers and make a run at a sixth championship ring. (GETTY IMAGES)

On the other hand, Haslem typifies what a Miami Heat player is all about: tough, aggressive, tireless and selfless. The undersized power forward has played his entire career with the Heat and is a close friend of Dwyane Wade. “UD is here to stay. Sacrifices all ard. I’m couldn’t b happier for any1 more then Mr Miami himself. My brother 4 life,” Wade wrote on his Twitter account.

Haslem’s deal is reportedly for five years at around $20 million.

Fisher has earned a reputation for making clutch shots throughout his playoff career, and is a huge influence in the locker room. During the 2010 NBA Finals against the Celtics, Fisher was the guiding force behind the Lakers’ huge victory in Game 3 and his tough defense on Celtics shooting guard Ray Allen, who is five inches taller than Fisher, was not to be ignored.

“Derek is very, very tough mentally and physically. He doesn’t back down from anyone,” Bryant said of his backcourt mate. “There’s not enough words or praise that I can use to describe him and how I feel about him.”

According to published reports, Fisher’s contract is a three-year deal, with the third year a player option. The negotiations got off to a slow start, with the Lakers not willing to match the $5 million per year Fisher was paid under his previous contract.

“I have decided to continue with Kobe [Bryant], continue with our teammates and the fans of Los Angeles,” Fisher said in a statement. “While this may not be the most lucrative contract I’ve been offered this off-season, it is the most valuable. I am confident I will continue to lead this team on and off the court. Let the hunt for six begin…”

Haslem opted to remain with the Heat, according to published reports, turning down bigger offers for the full mid-level exception from the Mavericks and Nuggets. Terms of Haslem’s new deal with the Heat were not available.

The Heat have stated throughout the offseason that bringing back Haslem was one of the team’s top priorities. It became an ever greater necessity when the team acquired All-Stars LeBron James and Chris Bosh to play with Wade in South Beach because Haslem is the type of player who doesn’t need to have the ball to be effective and does all the little things on the court that ultimately lead to winning ballgames. 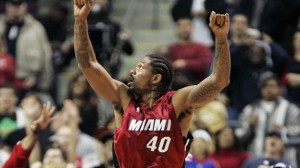 Udonis Haslem was a key member of the Heat's 2006 championship team. (ASSOCIATED PRESS)

“He’s the ultimate Miami Heat warrior,” Heat coach Erik Spoelstra said about the 6-foot-8 seven-year veteran. “Everything we try to have in a Miami Heat player, embodies all the characteristics, that’s Udonis Haslem.  He brings the toughness, he brings the character and he brings the leadership. And he’s true. There’s purity about who he is. He’s a Miami native and he’s special to all of us.”

Haslem, 30, averaged 12.7 points and 10.4 rebounds last season for Miami. In an e-mail to the South Florida Sun-Sentinel Monday, Haslem said, “Turned down full mid level from Dallas and Denver. See u next season.”

Miami is slowing building up its roster to surround Wade, James and Bosh. Joining Haslem on this year’s squad are third-year guard Mario Chalmers, rookies Jarvis Varnardo, Dexter Pittman and Da’Sean Butler and forward Mike Miller, who was acquired this week. The 6-8 guard/forward Miller reportedly inked a five-year deal. Haslem and Miller were former teammates at the University of Florida.

Last year, Haslem lost his starting job to second-year man Michael Beasley, who was recently traded to Minnesota to clear some cap space. Haslem is expected to come off the bench and back up Bosh this season and could play some center.