The NBA league office issued a statement on Thursday saying it will review allegations reportedly made in a tell-all book written by former referee Tim Donaghy – a book that was recently pulled from publication.

Excerpts from the book “Blowing the Whistle: The Culture of Fraud in the NBA” were recently posted Deadspin.com and among the allegations reportedly made by Donaghy was that he was able to bet on games based on information on the styles of officials and some of their relationships the veteran referees had with certain players and teams.

With the help of writer Tommy Craggs of Deadspin.com, here are some of the excerpts from Donaghy’s book:

Donaghy claimed that he and his co-workers would sometimes place bets on which one of them would call the first technical foul or the first foul.

Donaghy wrote: “To have a little fun at the expense of the worst troublemakers, the referees working the game would sometimes make a modest friendly wager amongst themselves: first ref to give one of the bad boys a technical foul wouldn’t have to tip the ball boy that night.”

“After the opening tip, it was hilarious as the three of us immediately focused our full attention on the intended victim, waiting for something, anything, to justify a technical foul. If the guy so much as looked at one of us and mumbled, we rang him up. Later in the referees’ locker room, we would down a couple of brews, eat some chicken wings, and laugh like hell.” 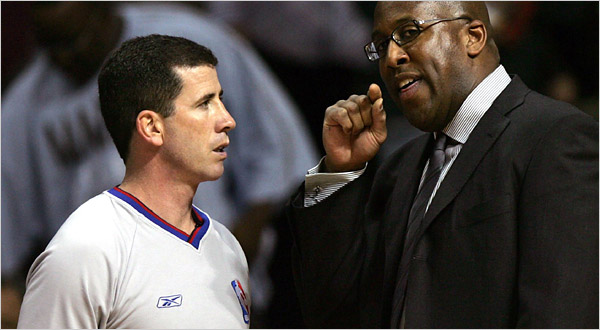 “We had another variation of this gag simply referred to as the “first foul of the game” bet. While still in the locker room before tip-off, we would make a wager on which of us would call the game’s first foul. That referee would either have to pay the ball boy or pick up the dinner tab for the other two referees. Sometimes, the ante would be $50 a guy. Like the technical foul bet, it was hilarious — only this time we were testing each other’s nerves to see who had the guts to hold out the longest before calling a personal foul. There were occasions when we would hold back for two or three minutes — an eternity in an NBA game — before blowing the whistle. It didn’t matter if bodies were flying all over the place; no fouls were called because no one wanted to lose the bet.”

“We played this little game during the regular season and summer league. After a game, all three refs would gather around the VCR and watch a replay of the game. Early in the contest, the announcers would say, “Holy cow! They’re really letting them play tonight!” If they only knew…”

“I became so good at this game that if an obvious foul was committed right in front of me, I would call a travel or a three-second violation instead. Those violations are not personal fouls, so I was still in the running to win the bet. The players would look at me with disbelief on their faces as if to say, “What the hell was that?”

Donaghy claimed that the relationships between NBA players and referees were generally all over the board — love, hate, and everything in-between. Some players, even very good ones, were targeted by referees and the league because they were too talented for their own good.

He wrote: “You would think that the NBA would love a guy who plays such great defense. Think again! Star stoppers hurt the promotion of marquee players. Fans don’t pay high prices to see players like Raja Bell — they pay to see superstars like Kobe Bryant score 40 points. Basketball purists like to see good defense, but the NBA wants the big names to score big points.”

“If a player of Kobe’s stature collides with the likes of Raja Bell, the call will almost always go for Kobe and against Bell. As part of our ongoing training and game preparation, NBA referees regularly receive game-action video tape from the league office. Over the years, I have reviewed many recorded hours of video involving Raja Bell. The footage I analyzed usually illustrated fouls being called against Bell, rarely for him. The message was subtle but clear — call fouls against the star stopper because he’s hurting the game.”

“If Kobe Bryant had two fouls in the first or second quarter and went to the bench, one referee would tell the other two, “Kobe’s got two fouls. Let’s make sure that if we call a foul on him, it’s an obvious foul, because otherwise he’s gonna go back to the bench. If he is involved in a play where a foul is called, give the foul to another player.”

“Allen Iverson provides a good example of a player who generated strong reaction, both positive and negative, within the corps of NBA referees. For instance, veteran referee Steve Javie hated Allen Iverson and was loathe [sic] to give him a favorable call. If Javie was on the court when Iverson was playing, I would always bet on the other team to win or at least cover the spread. No matter how many times Iverson hit the floor, he rarely saw the foul line. By contrast, referee Joe Crawford had a grandson who idolized Iverson. I once saw Crawford bring the boy out of the stands and onto the floor during warm-ups to meet the superstar. Iverson and Crawford’s grandson were standing there, shaking hands, smiling, talking about all kinds of things. If Joe Crawford was on the court, I was pretty sure Iverson’s team would win or at least cover the spread.”

Donaghy claimed that veteran referee Dick Bavetta was a master at game manipulation and “knew how to take subtle — and not so subtle — cues from the NBA front office and extend a playoff series or, worse yet, change the complexion of that series.”

He wrote: “From my earliest involvement with Bavetta, I learned that he likes to keep games close, and that when a team gets down by double-digit points, he helps the players save face. He accomplishes this act of mercy by quietly, and frequently, blowing the whistle on the team that’s having the better night. Team fouls suddenly become one-sided between the contestants, and the score begins to tighten up. That’s the way Dick Bavetta referees a game — and everyone in the league knew it.” 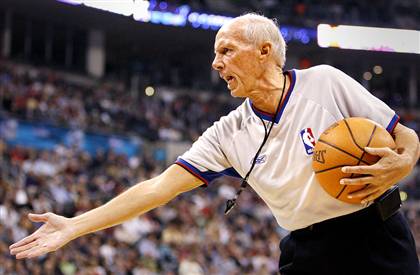 “Fellow referee Danny Crawford attended Michael Jordan’s Flight School Camp years ago and later told me that he had long conversations with other referees and NBA players about how Bavetta propped up weak teams. Danny told me that Jordan himself said that everyone in the league knew that Bavetta cheated in games and that the players and coaches just hoped he would be cheating for them on game night. Cheating? That’s a very strong word to use in any sentence that includes the name Dick Bavetta. Is the conscious act of helping a team crawl back into a contest “cheating”? The credo of referees from high school to the NBA is “call them like you see them.” Of course, that’s a lot different than purposely calling more fouls against one team as opposed to another. Did Bavetta have a hidden agenda? Or was he the ultimate company man, making sure the NBA and its fans got a competitive game most times he was on the court?”

“The 2002 Western Conference Finals between the Los Angeles Lakers and the Sacramento Kings presents a stunning example of game and series manipulation at its ugliest. As the teams prepared for Game 6 at the Staples Center, Sacramento had a 3–2 lead in the series. The referees assigned to work Game 6 were Dick Bavetta, Bob Delaney and Ted Bernhardt. As soon as the referees for the game were chosen, the rest of us knew immediately that there would be a Game 7. A prolonged series was good for the league, good for the networks, and good for the game. Oh, and one more thing: it was great for the big-market, star-studded Los Angeles Lakers.”

“In the pregame meeting prior to Game 6, the league office sent down word that certain calls — calls that would have benefitted the Lakers — were being missed by the referees. This was the type of not-so-subtle information that I and other referees were left to interpret. After receiving the dispatch, Bavetta openly talked about the fact that the league wanted a Game 7.”

“As history shows, Sacramento lost Game 6 in a wild come-from-behind thriller that saw the Lakers repeatedly sent to the foul line by the referees. For other NBA referees watching the game on television, it was a shameful performance by Bavetta’s crew, one of the most poorly officiated games of all time.”

“The 2002 series certainly wasn’t the first or last time Bavetta weighed in on an important game. He also worked Game 7 of the 2000 Western Conference Finals between the Lakers and the Trail Blazers. The Lakers were down by 13 at the start of the fourth quarter when Bavetta went to work. The Lakers outscored Portland 31–13 in the fourth quarter and went on to win the game and the series. It certainly didn’t hurt the Lakers that they got to shoot 37 free throws compared to a paltry 16 for the Trail Blazers.”

Donaghy also mentioned referee Tommy Nunez and his affinity for the San Antonio Spurs and Nunez impacted the 2007 playoffs, the year the Spurs won the NBA title.

He wrote: “My favorite Tommy Nunez story is from the 2007 playoffs when the San Antonio Spurs were able to get past the Phoenix Suns in the second round. Of course, what many fans didn’t know was that Phoenix had someone working against them behind the scenes. Nunez was the group supervisor for that playoff series, and he definitely had a rooting interest.”

“Nunez loved the Hispanic community in San Antonio and had a lot of friends there. He had been a referee for 30 years and loved being on the road; in fact, he said that the whole reason he had become a group supervisor was to keep getting out of the house. So Nunez wanted to come back to San Antonio for the conference finals. Plus, he, like many other referees, disliked Suns owner Robert Sarver for the way he treated officials. Both of these things came into play when he prepared the referees for the games in the staff meetings. I remember laughing with him and saying, “You would love to keep coming back here.” He was pointing out everything that Phoenix was able to get away with and never once told us to look for anything in regard to San Antonio. Nunez should have a championship ring on his finger.”

Many thanks to Craggs and Deadspin.com for the content, and for Jay Christensen of The Wiz of Odds for alerting me to this incredible development that could have strong ramifications and a permanent black eye to the NBA and its league of officials.

Allen Iverson provides a good example of a player who generated strong reaction, both positive and negative, within the corps of NBA referees. For instance, veteran referee Steve Javie hated Allen Iverson and was loathe [sic] to give him a favorable call. If Javie was on the court when Iverson was playing, I would always bet on the other team to win or at least cover the spread. No matter how many times Iverson hit the floor, he rarely saw the foul line. By contrast, referee Joe Crawford had a grandson who idolized Iverson. I once saw Crawford bring the boy out of the stands and onto the floor during warm-ups to meet the superstar. Iverson and Crawford’s grandson were standing there, shaking hands, smiling, talking about all kinds of things. If Joe Crawford was on the court, I was pretty sure Iverson’s team would win or at least cover the spread.