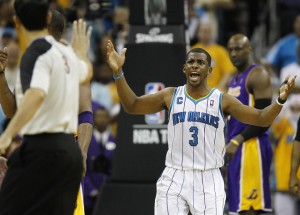 Chris Paul scored 27 points, grabbed 13 rebounds and dished out 15 assists in leading the Hornets to a victory in Game 4 against the Los Angeles Lakers in the first round of the 2011 Western Conference playoffs. (GETTY IMAGES)

Chris Paul is having fun again, and that’s bad news for the rest of the league.

After two injury-plagued seasons, the Hornets superstar point guard is back in the mix in terms of BPG (best point guards), and he’s proving all those naysayers wrong for doubting he’d ever return to his old form.

Chris Paul is still the best point guard in the NBA, despite all what you’re hearing from the experts who have fallen in love with Derrick Rose. Nothing against Rose, who deserves to be the 2010-11 NBA MVP, but he’s more of a lead guard than a true facilitator. Rose is more dangerous when he’s scoring. Paul is more dangerous when he’s setting up his teammates, which is a true definition of a point guard.

“Chris Paul . . .  that was one of the better performances that I have ever seen in the playoffs,” said Hornets first-year coach Monty Williams after Paul’s triple-double against the Lakers in the first round of the playoffs. “A lot of guys have performances where they score. He scored, he dished it out, he rebounded; he made tough, tenacious plays. A lot of times when that ball goes up and the rebound is a 50-50 ball and you see a 6-foot guy go up and get it just describes his heart. He makes me look better as a coach.”

Williams added, “Chris doesn’t have to score to control the game. He can pick his spots.”

The most impressive part of Paul’s triple-double against the Lakers was his 13 rebounds. The points (27) and the assists (15) can easily be attained, but grabbing 13 rebounds by a 6-foot guard (and that’s probably pushing it) is just mind-boggling.

“When you get to the playoffs, no one feels sorry for you,” Paul told reporters during his postgame press conference after Game 4. “They don’t care what’s wrong with your ankle, what’s wrong with your knee or anything like that. This is where players are made. I just looked at it as a great opportunity, for us as a team, to forget about the [regular] season and try to seize the moment.”

He added, “I play with a chip on the shoulder day in and day out. I’m not trying to make a statement. There’s nothing that I’m trying to do new or anything like that. I’m just being me.”

Paul’s relentless pursuit of the ball is a microcosm of how the Hornets were able to extend the two-time defending champions to six games. Even though the Hornets lost the series, Paul embraces being relevant again. “I’m just so thankful. This is my way of life. They pay me to do this,” Paul said. “I’m just happy I get to hoop.”

Spoken like a guy who truly loves the game and loves his job.

When healthy, nobody in the league can do what Paul does. Offensively, he runs the offense, he sets up shots for his teammates, he destroys a defense with his dribble penetration and when all else fails he has found his shooting stroke, which had been missing for most of the season. Defensively, Paul is a pest. He gets through screens and has extremely quick, strong hands, which allows him to disrupt a team’s offense.

“I just try to impact the game, whether its rebound or defending or getting those guys open shots. Just trying to be a point guard,” said Paul.

Paul will be a free agent at the end of the 2012 season, so there’s a 50-50 chance he’ll leave New Orleans. If he stays, the Hornets will remain a contender. If he leaves, basketball in New Orleans will become a ghost town.