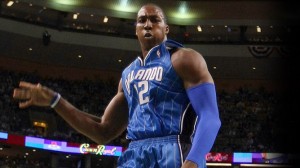 Dwight Howard made just one of six shots from the field in Orlando's 100-75 blowout loss to the L.A. Lakers in Game 1 of the NBA Finals. (GETTY IMAGES)

Hey, Dwight Howard. Shaquille O’Neal just sent you a message on Twitter: “I want my nickname back!”

In Game 1 of the NBA Finals with the whole world watching his every move, the self-proclaimed Man of Steel of the Orlando Magic was completely undressed and reduced to a mere mortal. He made just one of his six field goal attempts in his Finals debut – a far cry from his 40-point superhuman effort in the series-clincher against Cleveland – and 10 of his 12 points came from the free throw line. He did grab 15 rebounds, but you expected that from him. What the Magic did not expect was his ineffectiveness on both ends of the court.

When you want the general public to call you Superman, you cannot have a bad day. If Superman had a bad day, Lex Luthor would rule the planet and there would be complete chaos.

At the end of the day, Howard went from being Superman to Blankman.

The Los Angeles Lakers were able to blitz the Magic, 100-75, because they outrebounded the Magic, 55-41, and outscored them, 56-22, in the paint to take a commanding 1-0 lead in the series. It’s a commanding 1-0 lead because Phil Jackson is 43-0 when he wins the first game of a series and Kobe Bryant quite simply will not allow his Lakers to lose.

The Lakers’ domination of the paint was more of a reflection on Howard’s inability to put his stamp on the game. If Howard, aka Blankman, is supposed to be the best big man in the NBA then the league must have some really bad centers because the 23-year-old NBA first-teamer looked very ordinary. For a guy who is the reigning top defender in the league, Howard did a very poor job of protecting the basket. For a guy who makes 56% of his field goals and leads the league in dunks, Howard was outscored by Mickael Pietrus (14 to 12) and failed to throw down a single dunk in 34 minutes.

During his best years, Shaq would bust through arm tackles and take two or sometimes three people with him to the rim and unleash one of his signiture throw downs. Howard was held down by Pau Gasol, who is not exactly the most physical player in the league.

When Laker big men Andrew Bynum and Gasol took away Howard’s dunks, the Orlando big man began shooting blanks. His shortage of inside moves was magnified.

“He has to work on getting another move,” said Gary Payton, who now works for NBA TV. “Bynum and Pau Gasol are very good. They can play defense and they can go at [Howard]. What they did was, Bynum started off from the beginning. He went at him. Then, all of a sudden, Gasol started guarding him and he gets two offensive fouls on him. That takes you out of your basketball game. [Howard] has to understand that he has to face up guys, get a Tim Duncan bank shot or something like that, or get another move.”

Because Blankman could not punish the Lakers’ single coverage in the low post, the Magic shooters struggled mightily from the perimeter, making just eight of 23 threes (34%) and shooting 29% overall. Hedo Turkoglu was 3-for-11, Courtney Lee was 3-for-10, Rafer Alston was 2-for-9 and Rashard Lewis was 2-for-10 and scored just eight points, the first time he has been held under 15 points in the playoffs.

“If you can play Dwight Howard straight up, not allowing him to get dunks and make him finish his shots in the lane, you have a good chance of beating this team,” said Lakers assistant coach Brian Shaw, who has scouted Orlando all season.

Basically, Shaw revealed that the Lakers’ game plan on defense was to stay with Orlando’s snipers.

“You live by the bomb, you die by the bomb. That’s our philosophy,” Shaw said. “Everybody talked about how we’re going to match up with their 3-point shooters. Well, they have to match up with us on the inside. We play inside out. And we feel like we have an advantage because we can make Dwight Howard guard Pau Gasol or Andrew Bynum inside and that means Rashard Lewis has to guard the other one as well.

“So, if we keep that as our focus, that’s putting a lot of pressure on them defensively,” Shaw continued. “The more we can play Dwight Howard straight up we can match up with their shooters, and if they keep bombing from the outside we’ll live with that.”

The Lakers’ convincing victory in Game 1 revealed two things: Orlando is not going to win a championship and Dwight Howard is just a civilian posing as Superman.