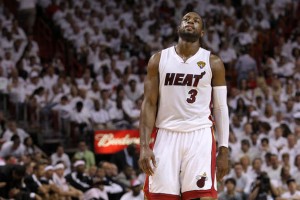 Dwyane Wade has informed USA Basketball that he will not participate in the Summer Games in London. (GETTY IMAGES)

The once robust Team USA roster got thinner this week as Miami Heat teammates Dwyane Wade and Chris Bosh both announced they’ll miss the Summer Olympics in London due to injuries.

Wade withdrew his name from the player pool for the U.S. Olympic basketball team on Thursday because his injured left knee will require surgery.

“As many people may know, throughout the season, I struggled with a recurring knee issue,” Wade said in a statement. “After the championship game, I visited with my doctors for a round of comprehensive medical tests, and the recent results dictate the need for surgery.

“While every part of me wants to be in London, I need to take this time to do what’s best to improve my health and allow me to continue to play the game I love.”

Bosh informed USA Basketball president Jerry Colangelo and head coach Mike Krzyzewski Friday that he won’t play in London because he is still recovering from the strained abdominal muscle that sidelined him for a portion of Miami’s run to the NBA championship.

“I am extremely disappointed to say that due to injury, I cannot represent my country in the 2012 Olympics in London,” Bosh said. “The abdominal injury that I suffered in Game 1 of the Eastern Conference Semi-Finals is not fully healed. After the Finals, I met with my doctors to determine the best course of action, with the full intent to play in the Olympics. From those meetings, I was advised that rest and additional rehab of my abdominal injury will be necessary in order to avoid the development of a chronic injury.

“Having enjoyed the honor of representing my country in the 2008 Olympics, when we won the gold medal, I wanted to be part of that experience again.  However, I must follow my doctors’ advice and properly take care of this injury. My thoughts will be with our guys in London in August and I am confident that Coach K and the USA Basketball staff will bring home the gold again to the USA.”