Barack Obama will serve a second term as President of the United States. (US PRESSWIRE)

The hotly contested presidential election was on the minds of the entire nation, and NBA players chimed in with their thoughts. Not a huge surprise that the players were heavily in favor of President Barack Obama, who won re-election on Tuesday, but there were some entertaining posts on Twitter.

The state of Ohio, which hasn’t had this much attention since LeBron James made his infamous decision, ended up putting President Obama over the 270 electoral votes needed to win. LeBron posted an interesting tweet as soon as the projections came in.

James wrote: “2 terms!!!! Ohio u guys are the awesome #ObamaStillPrez.” Then he followed that with this gem: “Ohio and Fla. My favorite states!”

Chicago Bulls great Scottie Pippen thanked the president for inviting him to play in a pick-up basketball game, while ESPN analyst and Hall-of-Famer Dick Vitale may have had the line of the night. Check out some of the tweets: 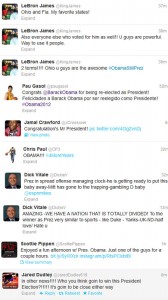