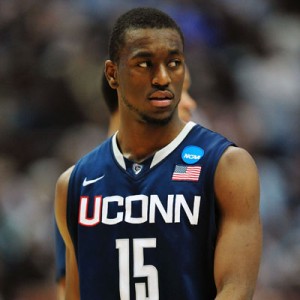 The NCAA Tournament is the best showcase event in terms of evaluating talent entering the NBA. In the past 10 years, current NBA stars Dwyane Wade (Marquette), Derrick Rose (Memphis), Russell Westbrook (UCLA), Deron Williams (Illinois) and Carmelo Anthony (Syracuse) all made their big first impressions in The Big Dance.

Of course, there are always those hidden gems (ahem! Enes Kanter) who didn’t get a chance to shine in the NCAA Tournament. But, for the most part, the best prospects in the 2011 NBA draft took part in March Madness.

Most experts feel this year’s crop of NCAA talent is not as good as previous years. I disagree. There are plenty of talent waiting to be discovered, and it takes a shrewd GM and a smart scout to pick them out of a crowd. Here are the eight best prospects this season – OneManFastBreak’s version of the Elite 8 – with their strengths and weaknesses, and who they compare with:

DERRICK WILLIAMS
Arizona, Forward, Sophomore
* Strengths: The 6-foot-8, 240-pound forward has the prototype body to play in the NBA. He can play with his back to the basket, and face up and shoot from 20 feet. Pop in the tape against Duke and that’s all you need to know about his versatility. A tough cover when he’s making his outside shot because he can put the ball on the floor and get to the rim. Williams was also the 2011 Pac-10 Player of the Year, and from a talent standpoint the Pac-10 has produced some of the best NBA talent the last 10 years.
* Weaknesses: A little passive and a late-bloomer. Could also mean he hasn’t hit his ceiling yet.
NBA comparison: Amare Stoudemire

KEMBA WALKER
Connecticut, Guard, Junior
* Strengths: A typical New York City baller who plays with a chip on his shoulder and has a ton of swagger. Made a huge leap from last season to this season. An explosive scorer who can create his own shot, and has the ability to play either guard position. Plays his best against the best competition. A very dangerous scorer late in the game, and is not afraid to take – and make – the big shot.
* Weaknesses: Even though he’s capable of running point, his game is more suited for shooting guard. Listed at just 6 feet tall.
NBA comparison: Ben Gordon

KYRIE IRVING
Duke, Guard, Freshman
* Strengths: Had Irving played the entire season, nobody would have known about Nolan Smith. That’s how good Irving is. Irving has all the tools to be a top-flight point guard in the NBA: quickness, ball-handling, outside shooting, passing and creativity. He was easily the best player on the court for Duke in its loss to Arizona in the Sweet 16, and that was only his third game in three months.
* Weaknesses: The foot injury Irving suffered early in the season is the only reason to have any doubts about this young man.
NBA comparison: Chris Paul

ENES KANTER
Kentucky (from Turkey), Center, Freshman
* Strengths: Kanter is a legit post-up big man who measures at 6-11 with a 7-1 wingspan. He recently turned 19 so he’s still maturing from a physical standpoint. He spent the entire 2010-11 season at Kentucky on the sidelines because he was ruled ineligible. Nonetheless, he made good use of that year by staying active, participating in practice and working out with the team. Kanter is cut from the same cloth as other recent big men from Turkey (Semih Erden and Omer Asik), and can play with his back to the basket.
* Weaknesses: Still a relative unknown because he hasn’t played enough games to get a strong evaluation. A high-risk, high-reward type of player.
NBA comparison: Omer Asik

BRANDON KNIGHT
Kentucky, Guard, Freshman
* Strengths: Plays with a lot of confidence. Teammate Terrence Jones may be the better talent, but there’s something special about the way Knight makes plays at the end of games. Knight showed his clutch gene during the Sweet 16 game against Ohio State when he buried the game-winning shot with five seconds left. Knight is a big point guard (6-3, 170) who can survive the physical pounding of an 82-game season. And John Calipari has done pretty well with his last two one-and-done point guards (Derrick Rose and John Wall).
* Weaknesses: At times makes questionable decisions and takes bad shots. More of a lead guard than a true point.
NBA comparison: Jason Terry

JIMMER FREDETTE
BYU, Guard, Senior
* Strengths: See Kemba Walker. A very explosive scorer who can create his own shot and has unlimited range as a shooter. Has the ability to play either guard position, but probably more suited at shooting guard. Worked out for scouts a year ago and was told to get stronger, which he did. Worked on his ball-handling this season, which has enabled him to drive through traffic.
* Weaknesses: Not a good defender. Has trouble staying in front of his man, especially against quicker point guards.
NBA comparison: Danny Ainge

JORDAN HAMILTON
Texas, Guard-Forward, Sophomore
* Strengths: A long and athletic wing player who can score from anywhere on the court. Has NBA 3-point range and a technically sound shooter. Can create scoring opportunities off the dribble, and able to rise up and get his shoulders square to the basket. Because of his length (6-9 wingspan), defenders have a hard time blocking his shot. Adapted well to Rick Barnes’ new motion/screen offense at Texas. Hamilton can play the 2 or 3 spots and is an extremely confident player with a ton of Southern California swagger.
* Weaknesses: Tends to be a volume shooter at times, and a bit of a streak shooter. Not a good defender at this point of his career.
NBA comparison: Rudy Gay

SHELVIN MACK
Butler, Guard, Junior
* Strengths: A combo guard who can create his own shot. Has decent 3-point range, but owns an above-average mid-range game. He was instant offense for Butler, and was a key reason why the Bulldogs reached the NCAA Tournament championship game the past two seasons. Having gone through the pressure cooker of the NCAA Tournament, Mack is battle-tested and is not afraid of the big moment. At 205 pounds, Mack is extremely strong for a guard and can shed physical contact.
* Weaknesses: Is more of a natural shooting guard, but may have to play some point in the NBA because he’s only 6-2. Not overly explosive off the floor, and has average quickness for a guard.
NBA comparison: Eric Gordon