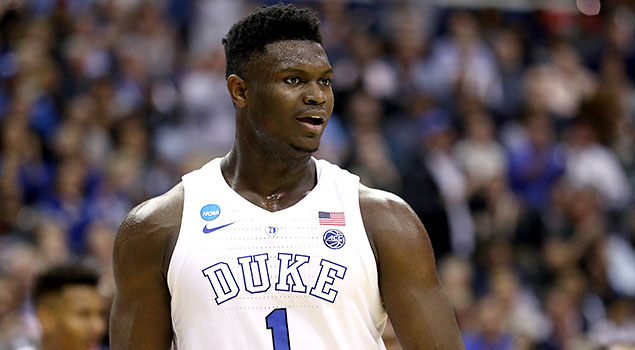 Zion Williamson is the big prize of the 2019 NBA draft. (Getty Images)

The hype surrounding the 2019 NBA draft all points to one player: Zion Williamson.

The Duke superstar is the most celebrated basketball pro prospect in recent memory and he will be coming to an NBA city near you. The New Orleans Pelicans hold the top pick in the draft and — barring some kind of cosmic event — they are expected to select the 6-foot-6, 280-pound beastly forward with the megawatt smile. Zion will be the cornerstone of Pelicans’ franchise.

Even though Zion is head and shoulders above everyone else in this year’s draft, there are still a few gems that could change the fortunes of many teams. If you need a guard, this draft’s for you.

OneManFastBreak.net breaks down the eight best players available in the 2019 NBA draft:

1-Zion Williamson, F, Duke
NBA comparison: Charles Barkley
Scouting report: Legendary Duke head coach Mike Krzyzewski calls Zion a “gift from God.” Williamson averaged 22.6 points and 8.9 rebounds while sweeping all of the National Player of the Year honors. His 72 dunks in 33 games were must-see highlights. Coach K told Yahoo Sports that Zion “may be an All-Star right away” and has no ceiling. Basically, the sky is the limit. Tough to argue with Coach K, but we’re not ready to hand the keys to the kingdom to Zion. As gifted as he is right now, he still has a few things to work on to improve his game. His jump shot looks more like a set shot and conditioning will be a concern. He may have to drop down in weight to play the full 82-game schedule.

2-Ja Morant, G, Murray State
NBA comparison: De’Aaron Fox
Scouting report: Ja Morant is the consensus No. 2 overall pick and looks like a lock for the Memphis Grizzlies after they traded away Mike Conley to the Utah Jazz. Morant is an explosive scorer with freakish athletic ability. Once he finds some consistency with his jumper … look out! Morant can play in the open court as well as in the half court. He can be a 25-point scorer in the NBA if he adds more muscle to his 175-pound frame.

3-RJ Barrett, G, Duke
NBA comparison: James Harden
Scouting report: Before the college basketball season started many scouts had RJ Barrett ranked ahead of his Duke teammate, Zion Williamson. Barrett is a smooth 6-6 athlete who can play point or shooting guard. Because he’s left-handed the James Harden comparisons are inevitable. Barrett is quick enough to get to the rim and skilled enough to get his shot off against one-on-one defense. The one knock on Barrett is he doesn’t have elite-level athleticism and tends to drive left almost exclusively. Harden isn’t an elite athlete either and he averaged 35 points per game going predominantly to his left side.

4-De’Andre Hunter, F, Virginia
NBA comparison: Luol Deng
Scouting report: Hunter, who won a national championship at Virginia, is one of the most NBA-ready players in the pool. He was the ACC defensive player of the year and has the ability to defend all five positions. The 6-7, 225-pounder with a 7-foot wingspan showcased his defensive skills by locking down Texas Tech’s Jarrett Culver in the title game. He is an undersized power forward which makes him the perfect modern day stretch 4. He has shown he can knock down the 3-point shot (43% shooter from behind the arc) making him the ideal 3-and-D player. You can pretty much plug him in most lineups and he’ll be able to hold his own.

5-Darius Garland, G, Vanderbilt
NBA comparison: Kemba Walker
Scouting report: The son of former NBA pro Winston Garland is rising fast on a lot of experts’ draft boards. Despite playing just five games in his college career at Vanderbilt, Garland could be a top-five selection because of his good genes and enormous potential. His greatest attribute is his ability to play off the bounce. He can score from 3-point range as well as mid-range. He is quick enough to get to the basket and is comfortable running pick-and-roll. It would not come as a surprise if Garland turned out to be the second-best player to come out of this draft.

6-Coby White, G, North Carolina
NBA comparison: Jamal Murray
Scouting report: White learned how to play point guard in his lone season in Chapel Hill under the guidance of Roy Williams, who knows a thing or two about developing NBA point guards (ex. Raymond Felton, Ty Lawson, Kendall Marshall). At 6-5, White has the size and speed to be an elite NBA guard. He is an explosive scorer. He’s got the 3-point range and the mid-range game and a floater. The only question mark is his decision-making. He still raw in terms of running an offense, as he tends to be ball-dominant. But once he learns how to be a better playmaker he could end up being better than Felton and Lawson.

7-Romeo Langford, G, Indiana
NBA comparison: Bradley Beal
Scouting report: The Indiana native is a natural-born scorer. His ability to drive to the basket and get a bucket is his best attribute. At 6-6 and 210 pounds, Langford can play through contact and finish at the rim. He doesn’t a consistent long-range shot yet, but he can develop as he progresses and with proper coaching. Langford has All-Star potential if given the opportunity.

8-Brandon Clarke, F, Gonzaga
NBA comparison: Shawn Marion
Scouting report: Clarke is an interesting prospect. He was arguably the second or third scoring option at Gonzaga, so we didn’t get to see his full potential. But when the lights were brightest, he showed up big time. In NCAA tournament games against Baylor, Florida State and Texas Tech, Clarke averaged 23 points, 11 rebounds and shot 67% from the field. During the season, he grabbed 114 offensive rebounds, blocked 117 shots and had 43 steals. Those are numbers every coach loves. His athleticism is off the charts. He has a 40.5-inch vertical leap, and timed extremely well in all the agility drills at the draft combine. He loves to compete and has an extremely high basketball IQ. Some NBA team will be lucky to have him.