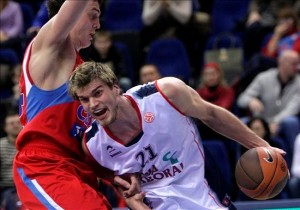 The Spurs’ signing of Euroleague center Tiago Splitter earlier in the week had very little fanfare. There were no ESPN one-hour specials, no Jim Gray playing emcee and the news was absent from all the 24-hour news networks.

It was your typical Spurs offseason transaction. Very low key and very business-like.

The move may not look significant now but when the season begins in October teams will realize that the Spurs just got bigger and better by adding the best big man in Europe.

“We’re very fortunate to be adding one of the best players not playing in the NBA,” Spurs general manager R.C. Buford said of the heralded 6-foot-11 Brazilian star who was drafted by the Spurs in 2007 with the 28th pick, but played in Europe the past three seasons. Now, he will play alongside his idol, Tim Duncan, in the San Antonio frontcourt.

In the Euroleague, Splitter wore No. 21 because of Duncan. In the NBA, he will wear No. 22.

“I really decided that I wanted to come here,” Splitter told the Associated Press. “I stayed more time in Europe to improve my game a lot. It was the right time at the right moment.”

The 25-year-old was MVP of both the Spanish League regular season and finals while leading Caja Laboral Vitoria to a second championship, averaging 15.4 points and 7.1 rebounds in 38 games. He shot 59% from the field and 76% from the line.

The 235-pound Splitter still has room to grow physically, but he easily becomes the most talented big man to play with Duncan since David Robinson retired in 2003.

The Spurs are a franchise built on dominant big men. There was Artis Gilmore in the 1980s, followed by Robinson in the 1990s and then Duncan in the 2000s. But Duncan prefers to play power forward and he’s had to endure a slew of low-level, journeyman-type centers the past seven years.

Remember Rasho Nesterovic? Or, how about Nazr Mohammed? And who could forget the very bland Fabricio Oberto era?

Splitter is expected to contribute right away and it would be a huge disappointment if he’s not in the starting lineup on opening night. He’s certainly upgrade from Matt Bonner and Antonio McDyess.

Bringing Splitter aboard was an offseason target for the Spurs after being swept by Phoenix in the Western Conference semifinals. San Antonio hasn’t drastically changed its roster since, apart from swingman Richard Jefferson opting out of his deal for free agency.

Terms of the deal were not disclosed, but Splitter didn’t appear lured by an immediate NBA payday. The most the Spurs could offer Splitter this season was their midlevel exception, around $5.8 million, whereas his Spanish club could have offered him more.

“If I stayed in Spain I could have made more money,” Splitter said. “But this is my moment.”

In addition the team has advanced to at least the quarterfinals of the Euroleague Championship six straight seasons (including four straight semifinal appearances from 2004-08).