There must be something in the water in the state of Ohio because not only does it own the best player in the NBA in LeBron James, but the Buckeye state is also home to the top collegiate player in the nation.

Kentucky’s John Wall may be the most spectacular backcourt player this season and teammate DeMarcus Cousins may be the most physically gifted post player in the country, but Ohio State’s Evan Turner is the most complete.

Ohio State coach Thad Matta told SI.com that Turner, a 6-foot-6 junior swingman, is a very “intelligent player with a refined sense of moment that allows him to deliver whatever his team needs.”

There is nothing on the basketball that Turner can’t do. Sound familiar? Yup, very LeBron-esque. Turner can handle the ball and score on his own or create shots for his teammates. Because of his versatility, he is too big for guards and too quick for forwards. And his ability to play four positions affords Matta the luxury to use his best player on multiple sets.

Turner also has a competitive drive that rivals all the great players who have come before him, as well as a knack for making big shots. During the quarterfinals of the Big Ten Tournament, Michigan held a 68-66 lead with 2.2 seconds left and it appeared the Buckeyes were going to get clipped by the hated Wolverines. But Turner had the final say.

He took the inbounds pass near midcourt, took two dribbles and drained a jump shot from about 27 feet to give Ohio State a buzzer-beating 69-68 victory. Turner held up his goose neck as his teammates rushed to congratulate him, almost signifying that the game was in his hands and he delivered a victory. 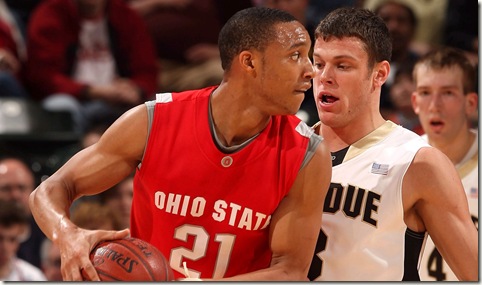 Matta believes the key to Turner’s success is his thirst for perfection.

“He’s one of those guys who’s very critical of his game and is not afraid to admit he has faults,” Matta told SI.com. “A lot of kids don’t want to admit that, ‘Hey, I’m not good at this.’ And they sure as heck don’t want to work on it. Evan is a kid who knows the game, he knows what he needs to get better at, and he’s going to put in the work.”

Hard work has put Turner on an elite level, and it is his near flawless game that puts him head and shoulders above the competition. OneManFastBreak.net picks the eight best players in college basketball for 2010. Let’s call it OMFB’s Elite Eight.

PLAYER OF THE YEAR

— Evan Turner (6-6, junior, Ohio State) – The Big Ten Player of the Year averaged 20 points, 9 rebounds and 6 assists for the season. He led the Big Ten in scoring and rebounding and second in assists, third in steals (1.8) and fifth in field goal percentage (54%).

THE REST OF THE FIRST TEAM

— John Wall (Kentucky, 6-4, freshman, guard) – Was fourth in the SEC in points per game (16.4), first in assists (6.4) and third in steals (1.8). NBA scouts love his size for a point guard, as well as his natural ability to lead a team. Kentucky coach John Calipari says Wall is his hardest worker and has the highest GPA on the team.

— DeMarcus Cousins (Kentucky, 6-11, freshman, forward/center) – Was ninth in scoring in the SEC (15.3), second in rebounds (10.1), sixth in field goal percentage (54%) and fourth in blocks (1.8). The top offensive rebounder in the SEC with a 4.1 average. An emotional player who can sometimes drift in and out of games. But when his mind is right, he is a force under the basket.

— Scottie Reynolds (Villanova, 6-2, senior, guard) – Was fifth in the Big East in scoring (18.5) and seventh in free throw percentage (82%). More of a scoring point guard, which explains why he doesn’t get many assists (3.3). He is listed at 6-2 but he might be more closer to 6-0. Syracuse’s Wes Johnson may have won Big East POY, but Reynolds was by far the best player in the conference.

— James Anderson (Oklahoma State, 6-6, junior guard) – A unanimous All-Big 12 first team selection. Led the Big 12 in scoring with 22.9 points per game. He averaged 24.1 points in conference and had five 30-point games and 17 25-point efforts. He is the second Oklahoma State student-athlete to garner player of the year honors, following Tony Allen in 2003-04.

— Cole Aldrich (Kansas, 6-11, junior, center) – A member of the Jayhawks’ 2008 National Championship team. The junior center finished second in the Big 12 with 110 blocks and a key component on the Jayhawks’ third-ranked defense nationally. Aldrich anchored a Kansas squad that limited the opposition to 37% shooting.

— Greivis Vasquez (Maryland, 6-6, senior, guard) – Coming back for his senior turned out to be a wise move for combo guard from Venezuela. He averaged almost 20 points a game and 6.3 assists per game, and was named ACC Player of the Year. He has really good size for a guard, which makes him very attractive to pro scouts. Should be a first-round pick in the NBA draft.

— Wes Johnson (Syracuse, 6-7, junior, forward) – The transfer from Iowa State has bumped up his scoring average from 16.5 during the regular season to 24.5 for the first two rounds of the NCAA Tournament. He is the Big East Player of the Year and is a big reason why Syracuse is in the Sweet 16. He is projected to be a high first-round pick in the NBA draft.