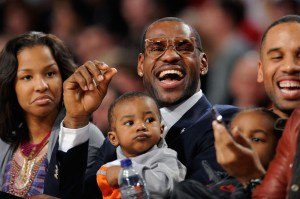 LeBron James watches with his family during All-Star Weekend. Home and family were highlighted during the Cavaliers' final pitch to James. (GETTY IMAGES)

Home is Cleveland and the Cavaliers are family.

Those were the points of emphasis the Cavaliers hammered home to LeBron James in their final attempt to convince their hometown hero to remain in Cleveland.

Cavaliers owner Dan Gilbert, newly hired head coach Byron Scott and general manager Chris Grant met with James and his management crew for a little over an hour Saturday and, according to Brian Windhorst of the Cleveland Plain-Dealer, part of the presentation included a cartoon clip that featured LeBron and his friends, made in a “Family Guy” style, one of James’ favorite TV shows.

When Grant said the meeting was “fun and very interactive” he was likely referring to the “Family Guy” part of the presentation.

“We had a very good meeting with LeBron and his group. It went well, we had a good time, we had fun, it was very interactive. Obviously we know LeBron well. I would characterized it as positive,” said Grant, who took over the GM duties when Danny Ferry left the team earlier this year.

Using “Family Guy,” as crazy as it may seem, may be the best approach to reach the two-time NBA MVP at this point. It shows that the Cavs know LeBron best. It was a personal touch that only a close family member can formulate, and it also provided some levity in an otherwise high-tension moment for all parties involved. While teams such as the Heat, Bulls and Knicks made their very serious offers and formal business proposals to James, the Cavs went with an approach that was totally out of left field.

Windhorst wrote the team had been planning on the cartoon presentation for six months.

James was drafted by Cleveland in 2003 and has never played for another NBA team. The Cavaliers are like family to him, and every home game at Quicken Loans Arena is like one big backyard barbecue.

The LeBron James free-agent saga has become such a hot-button topic that even tennis star Serena Williams was asked about where LeBron should go just moments after she had won her fourth Wimbledon title in England.

Maybe the Cavaliers should have invited Serena Williams to their scheduled meeting with James in downtown Cleveland. She certainly would have made an attractive argument.

Another point of emphasis for Grant and the Cavs was “home,” as in keep LeBron in his home state of Ohio and continue to work toward building a championship team.

Scott knows all about winning for your hometown team. The former Los Angeles (Inglewood) High School standout – who grew up just a few blocks from The Forum where the Lakers used to play – won three NBA titles as a member of the Lakers in the 1980s and he could certainly share his experiences with James, who attended high school at St. Vincent-St. Mary’s in Akron.

Dirk Nowitzki has decided to re-sign with the Dallas Mavericks, Paul Pierce has agreed to remain with the Boston Celtics and Joe Johnson has 120 million reasons to stay in Atlanta. The Cavaliers are hoping James will follow suit.