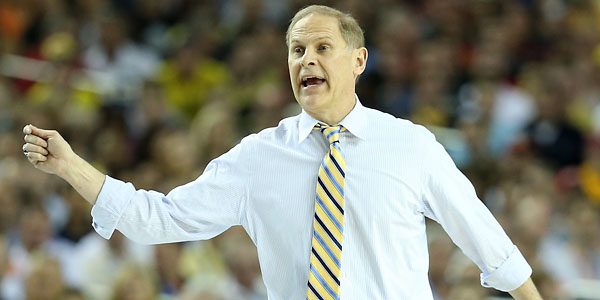 Michigan head coach John Beilein has no one to blame but himself after his Wolverines lost to Louisville, 82-76, in the 2013 national championship game at the Georgia Dome.

The game was an instant classic, as both teams went at each other like two prize fighters in Las Vegas. Michigan threw the first punch when reserve guard Spike Albrecht played the game of his life, scoring 17 points in the first half to power Michigan to a 12-point lead. Louisville countered with Luke Hancock, named the Final Four most outstanding player. Hancock scored 12 points in three minutes (all threes) to close the Cardinals to within one at halftime.

Beilein may have gotten caught up in all the excitement because he committed two crucial coaching mistakes: 1) he kept national player of the year Trey Burke on the bench far too long in the first half when Michigan had all the momentum, and 2) he dashed the Wolverines’ comeback hopes late when he lost track of team fouls.

Michigan coach John Beilein admitted he didn’t realize how many fouls his team had committed in the final minute of Monday’s 82-76 national championship loss to Louisville, a major error that affected the Wolverines’ strategy down the stretch.

With Michigan trailing 78-74, it appeared the Wolverines got a key stop with 52 seconds left when Peyton Siva missed a runner. But Michigan freshman Caris LeVert stepped on the baseline while securing the rebound, turning the ball back over to Louisville and seemingly forcing an immediate foul situation – especially with Michigan only having five team fouls.

Instead, Michigan tried to play defense and force a turnover, wasting 13 precious seconds before center Gorgui Dieng got fouled. To Beilein’s surprise, however, that was only the Wolverines’ sixth team foul. By the time they committed the seventh and put Louisville at the foul line, just 29 seconds remained. Luke Hancock made both foul shots, extending the lead to 80-74.

Wasting those 23 seconds proved to be crucial, as Michigan got back within 80-76 but had only 14 seconds left to come back. Siva’s free throws with 12 seconds left iced the game.

Beilein should be commended for admitting his mistake in the final moments. He just dropped the ball, period. But that was only half the story. His misuse of Burke of Michigan in the first half was almost as egregious. Sure Burke had two fouls and sitting him may have been the safe play. But to win championships you have to take some chances, and Beilein didn’t roll the dice and trust that his All-American guard wouldn’t commit a third foul in the first half. After Burke picked up his second foul with about 12 minutes left in the first half, he never got off the bench.

Burke committed just one foul the rest of the game, and it was a questionable one too when he appeared to have all ball on Peyton Siva’s layup in the second half. That goes to show that Burke could have played despite the foul trouble. When Louisville made their run late in the first half, Beilein should have inserted Burke back in the game to halt the momentum. Instead he played it safe, rode with Albrecht, and allowed Louisville to regain the momentum and obliterate Michigan’s double-digit lead in three minutes.

Hindsight is always 20-20, but having Burke on the court certainly could have helped Michigan when Louisville made its run.