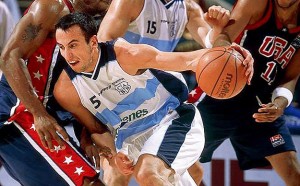 Manu Ginobili has been the face of Argentina's national team for more than a decade. (FIBA)

Since stunning a United States team loaded with NBA players in the 2002 World Championships in Indianapolis and capturing the gold medal at the 2004 Olympics, Argentina has been universally recognized as a powerhouse in FIBA competition.

Led by San Antonio Spurs guard Manu Ginobili, arguably Argentina’s greatest player, the South Americans have been a fixture in the medal rounds in the Olympics and World Championships for a decade. But since its fourth-place finish at the 2006 World Championships, Argentina appears to have lost some of its magic as its core group continues to log serious mileage.

Argentina is currently No. 3 in the FIBA world rankings, only behind the United States and Spain. Despite its top-five standing, Argentina is no longer a cinch to win a medal in the 2012 Olympic Games in London as Greece, Lithuania, Turkey, Italy, France and Brazil – the team Argentina defeated in the championship game of the the 2011 FIBA Tournament of the Americas – are hot on its tail and have more young talent in their programs.

Argentina’s big names are still there: Ginobili, Luis Scola, Fabrico Oberto, Andres Nocioni, Pepe Sanchez and Carlos Delfino. Ginobili and Scola are still regarded as two of the best players in the world, but the rest of the squad is looking very old and there seems to be a drought in terms of young talent in Buenos Aires.

Ginobili turned 34 this summer and Scola is 31. At 36, Oberto is way past his prime and even though Nocioni is two years younger than Ginobili his reckless style has caught up with him and his legs seem like they are ready to retire. Delfino is one of the youngest frontline players on the roster and he’s 29.

The 2012 Olympics will more than likely be this group’s last hurrah. Ginobili could try for another Olympic run in four years, but he’ll be 38 and his body may prevent him from playing. Scola doesn’t rely on athleticism so he may still be an effective player in four years. But for the rest of the core players, four years is a very, very long shot.

While the Argentines continue to hang their sombreros on international vets, the other South American hoops powerhouse, Brazil, has rebuilt its program behind a familiar face. Ruben Magnano, who guided Argentina to a gold medal in the 2004 Athens Olympics, was brought in to coach Brazil in 2010. A year later, Magnano has the Brazilians playing their best ball since the Oscar Schmidt era, earning one of the automatic qualifying berths for the 2012 Olympics after reaching the final of the 2011 FIBA Americas.

What was more impressive about Brazil’s run in the FIBA Americas was it reached the final without the help of NBA stars Leandro Barbosa, Nene and Anderson Varejao, who all decided to skip the tournament.

While Argentina leans heavily on Scola and Ginobili on offense, Brazil has a more balanced approach that features the playmaking skills of point guard Marcelo Huertas, who plays for Regal FC Barcelona. Spurs center Tiago Splitter is the only NBA player on Brazil’s roster at FIBA Americas, but he has had minimal impact offensively. The Brazilians have won eight of nine games, including an impressive 73-71 victory over Argentina. Its only loss came against the Dominican Republic in the early round, but it avenged that loss in the knockout round by defeating the Dominicans (led by Al Horford, Francisco Garcia and Charlie Villanueva), 83-76, in the semifinals.

Argentina had a much tougher matchup in the semis, but it managed to squeeze past a rugged Puerto Rico squad (led by J.J. Barea and Carlos Arroyo), 81-79, behind 27 points from Scola and 23 from Ginobili. Scola saved his best for last as he poured in 32 points to power Argentina to a 80-75 win over Brazil in the final.

As long as Scola and Ginobili are healthy, Argentina remains a powerful force and medal contender.