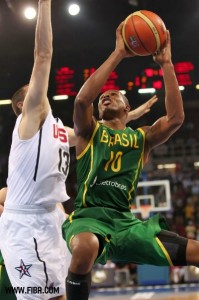 Leandro Barbosa scored 14 points for Brazil against the United States, but missed the one that could have tied the game at the buzzer. (FIBA)

Despite the absence of forwards Nene and Anderson Varejao, Brazil came within a basket of tying the United States at the end of regulation in Monday’s Group B matchup in the 2010 FIBA World Championship in Turkey.

Fortunately for the Americans, Leandro Barbosa took the point-blank shot and – not surprisingly – missed. It was essentially a layup, and Barbosa blew it. He played well when his team was rolling, scoring eight points and making three of his five field-goal attempts in the first quarter. But when it mattered most, he crumbled under pressure. Barbosa shot just 2-for-13 the rest of the game and 3-for-13 from 3-point range.

Playing “small” in “big” games has haunted Barbosa for much of his NBA career, and it was probably the reason why he was traded this offseason from Phoenix to Toronto. During his time with the Suns when the team was out in front and playing loose, Barbosa (aka The Brazilian Blur) was at his best: penetrating, dishing, scoring. He is one of the best front-runners in the NBA.

“Leandro Barbosa is one of the best international players in the world,” U.S. coach Mike Krzyzewski told FIBA.com.

At times, when The Brazilian Blur has it going, he’s nearly unstoppable. A career 12-point scorer in the NBA, Barbosa can score on anyone, and his first step maybe one of the quickest in the world.

But when the game gets in a halfcourt set and every possession is valued, Barbosa becomes tentative and his ball tends to get a little heavy. That’s Leandro Barbosa in a nutshell.

He had an opportunity to bail out his teammate Marcelo Huertas , who missed the first free throw and had to intentionally miss the second with time winding down. Huertas found Barbosa near the basket for the game-tying shot, but The Brazilian Blur got a little blurry and blinked. He missed a bunny!

Had he made THAT SHOT against the U.S., he could have been the hero of the tournament thus far and given his country an incredible opportunity for a monumental upset.

Had he made THAT SHOT, the Suns could rescind the trade (OK, maybe not).

The United States escaped with a 70-68 victory and remained undefeated. Meanwhile, after winning its first two ballgames, the Brazilians have dropped their last two. They lost 80-77 on Wednesday to Slovenia, dropping them to third place in Group B.