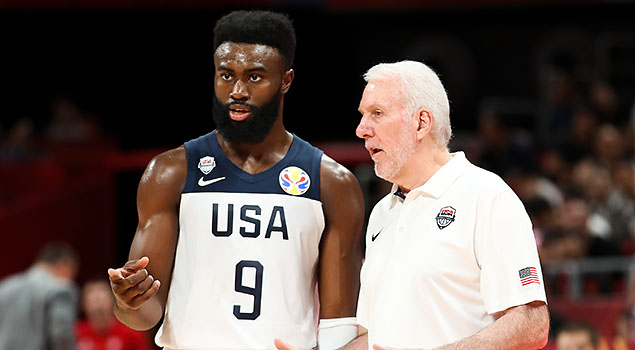 What should have been the culmination of another USA dominance at the World Cup turned into a sad post-mortem following the worst finish by an American squad in an Olympic or World Cup tournament. For the first time since the 2002 debacle in Indianapolis when the U.S. finished sixth, the red, white, and blue failed to win a medal in a major international tournament. Team USA were removed from medal contention after losing to Rudy Gobert’s French squad in the quarterfinals. A few days later, Team USA lost to Nikola Jokic’s Serbia squad in a consolation-bracket game. After that game, the Serbs didn’t even celebrate. They just walked off the court as if they expected to win.

Serbia was likely disappointed as well for not winning gold as it was one of the favorites entering the tournament. Spain — the No. 2 team in the world and led by NBA veterans Ricky Rubio and Marc Gasol — went home with the gold medal after defeating Argentina in the final. Rubio was named MVP of the tournament. France defeated Australia to claim bronze.

The U.S. played out the tournament by beating Poland 87-74 in a meaningless seventh-place game. Afterwards, Popovich went off on critics while praised the players who sacrificed their offseason for an opportunity to represent the red, white and blue on the international stage. According to ESPN’s Brian Windhorst, Popovich said anyone who thinks the team should be ashamed for not winning a medal is “immature” and “arrogant.”

“Some people want to play the blame game. There’s no blame to be placed anywhere,” Popovich said. “They want to play the shame game, like we should be ashamed because we didn’t win a gold medal? That’s a ridiculous attitude. It’s immature, it’s arrogant, and it shows that whoever thinks that doesn’t respect all the other teams in the world and doesn’t respect that these guys did the best they could.”

He added: “Their effort was fantastic. They allowed us to coach them. You give people credit for what they did, and that’s it. But it’s not a blame and shame game. That’s ridiculous.”

Popovich should be commended for his fatherly move to help ease the pain of the team’s failure. But there’s no silver lining in the team’s performance. It was awful.

The team was poorly coached and poorly constructed. USA Basketball president Jerry Colangelo can criticize the NBA superstars for skipping the tournament, but it doesn’t hide the fact that this team was not built to compete for gold. Sometimes is amiss when you have four members of the Boston Celtics (Kemba Walker, Jaylen Brown, Jayson Tatum, Marcus Smart) and Mason Plumlee on the roster. Only Walker was worth of a roster spot and fit the mold of a FIBA-type player. Brown and Tatum are good NBA players but their games don’t translate well to the FIBA game. They thrive in isolations. The FIBA game is more about ball and man movement, and offense is created with passing and outside shooting. Tatum ended up getting hurt and missed the final games.

Smart was a curious choice as well. You can make an argument that Pop kept Smart for his defense, in case the U.S. runs into Greece. Well, it did run into Greece and Smart locked up Giannis Antetokounmpo. But outside of that game, Smart was basically useless. He’s not a good shooter and not a true point. He was a liability on offense.

Speaking of liability, Plumlee’s inclusion on the squad was the biggest headscratcher. We get it that he’s a legacy player from the Mike Krzyzewski regime. But Plumlee had no business being on the roster. He’s barely an NBA player. Team USA would have been better off keeping Kyle Kuzma, whose game is suited for FIBA and can play center in a pinch.

About the only good news to come out of this World Cup was the fact that Team USA qualified for the 2020 Olympics in Tokyo. Pop and Colangelo have 10 months to regroup and try to piece back together a fractured program.