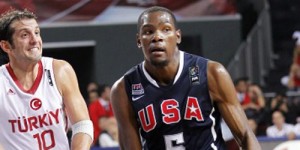 Kevin Durant averaged 33 points per game in Team USA's final three games at the FIBA World Championship. He scored 28 in the final against Turkey. (FIBA)

After leading the United States to a 81-64 victory over host nation Turkey in the 2010 FIBA final, the 21-year-old forward of the Oklahoma City Thunder accomplished something LeBron James and Dwyane Wade couldn’t do four years ago, which is win a World Championship.

By capturing basketball’s version of the World Cup, the Americans earned an automatic berth to the 2010 Olympics. It was the first FIBA title for the U.S. since 1994, ending a 16-year drought and reasserting itself as the most dominant team in the world.

The U.S. couldn’t have done it without Durant, who was named the MVP of the FIBA tournament voted by international media representatives at Istanbul’s Sinan Erdem Dome. He put an exclamation point to his first trip to the World Championship with a 28-point performance in the final against Turkey.

While his teammates struggled from the field (1-for-10 from 3-point range in the first half) early against Turkey, Durant was on point and was unfazed by the enormity of the stage. He converted five of nine 3-pointers in the first half and scored 20 of his team’s 42 points. The reigning NBA scoring champion made seven of 13 3-point shots and 10 of 17 field goals.

“He elevated. He was on a pretty high floor already but he went close to being in the penthouse,” U.S. head coach Mike Krzyzewski said of Durant, who averaged nearly 23 points per game for the tournament, but 33 the last three games.

“The beauty about Kevin is he’s pure. He’s not trying to do anything except play basketball and get better,” Krzyzewski added. “I love coaching him and he learned how to be a really great international player in the last five weeks which will help him be an even better NBA player. He’s very genuine. He’s a special guy and definitely a special player.”

The more you watch Durant and the more he convinces you he now deserves to be included in the conversation of “best player in the world.” The fact that he has embraced the role of go-to guy at the World Championship shows that, despite his age, he’s ready to challenge Kobe’s NBA title and LeBron’s MVP.

Former NBA star Steve Smith, now an analyst for NBATV, has dubbed Durant “Baby Ice” for having a little George Gervin in his game and possessing a very cool and calm demeanor. And the “Durantula” nickname came about because he’s freakishly long (6 feet 11 inches tall with a 7 feet 5 wingspan). I’m suggesting a third moniker: Clutch.

After averaging “just” 17 points in the preliminary round, Durant has turned it up in the knockout round, scoring 33 points against Russia in the quarterfinals and 38 against Lithuania. His 38-point outburst against Lithuania in the semifinals broke Carmelo Anthony’s single-game U.S. record set in 2006.

“He is so smooth, he makes it so dang simple. And the shots that he missed could have gone in. He could have had 60,” newly nominated FIBA Hall-of-Famer Cheryl Miller said of Durant, who set the tone in the semifinal game by scoring 12 of USA’s 14 points in the first five minutes of the game and finished with 24 points in the first half. He converted 14 of 25 shots from the field and also grabbed nine rebounds.

“When a guy is doing that well you have to keep getting him the ball. He just had an incredible scoring run,” said Krzyzewski, who predicted when the tournament started that he needs Durant to be the go-to guy and at some point Team USA will lean heavily on him when things get hot and heavy.

Coach K proved to be prophetic.

Durant turned it up a notch when the stakes were highest. Aside from being named MVP, he broke the American record for most points in a single game and for an entire tournament.

The humble superstar collected the MVP trophy and was also handed a one of a kind Tissot T-Touch Expertwatch by Francois Thiebaud, the president of FIBA Global Partners Tissot.

Now that he has conquered the world, Durant sets his sights on conquering the NBA.

Watch out Kobe. Look out LeBron. The Durantula is coming.