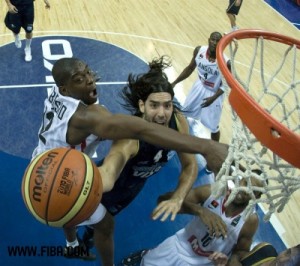 Don’t cry for Argentina just yet.

Even though the South Americans don’t have their best player, Manu Ginobili, in the 2010 FIBA World Championship, the 2004 Olympic gold-medalists are still a threat to contend for a medal in Turkey.

Luis Scola has become the unquestionable leader of the team and he having a very good tournament thus far.

The 6-foot-9 power forward – who recently signed a five-year deal with the Houston Rockets reportedly worth $47 million – is the engine that drives Argentina’s basketball factory. He’s a tough-minded player with an array of low-post moves. And even though Scola is not a very gifted athlete, he makes up for it with smarts and grit.

Scola scored 32 points to help Argentina beat Angola, 91-70, in a Group A game Monday, essentially securing the Argentines a place in the second round at the World Championship. Scola is averaging a tournament-best 28 points per game and a team-best seven boards. It wouldn’t be farfetched to say that Scola is one of the five best players at the FIBA level.

He scored 17 of Argentina’s 23 points in the first quarter against Angola as the South Americans built a three-point lead. He finished the half with 21 points as Argentina led 45-32 at halftime. In an 88-79 victory over Jordan on Wednesday, Scola netted a game-high 30 points on 13-of-18 shooting from the field.

The other half of Argentina’s 1-2 punch is Carlos Delfino. The Milwaukee Bucks guard lit up Angola for 22 points and then scored 18 against Jordan. The streak shooter is capable of carrying Argentina for long stretches and he’s also a very good ball-handler and defender.

Delfino is finally getting an opportunity to shine after playing in the shadows of Ginobili and Andres Nocioni in previous major international competitions. The 6-5 guard is averaging 18 points, five rebounds and almost four assists.

The other Argentine with NBA experience is Fabricio Oberto, who won a championship ring with the San Antonio Spurs in 2007. Oberto spent four seasons in San Antonio and played for the Washington Wizards last season.

Point guard Pablo Prigioni is a veteran guard with plenty of international experience. He leads the team in assists at 4.7 and he allows Delfino to play off the ball, in which he’s more effective.

Argentina (4-0) appears to be on track to finish Group A in first place, with only Serbia standing in the way of a perfect round. Regardless of how it does against Serbia, Argentina will be a tough out in the knockout round.