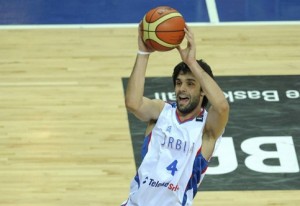 With one incredible long shot, Milos Teodosic lifted Serbia into the semifinals of the 2010 FIBA World Championship and ended Spain’s reign as world champions.

After Spain tied the game at 89 with 25.8 seconds left in the game on Marc Gasol’s dunk, Serbia put the ball in the hands of its playmaker, Teodosic, and the Euroleague’s 2010 MVP delivered one of the most dramatic game-winning shots in FIBA history.

As the shot clock and the game clock wound down, Teodosic calmly walked the ball up the middle of the court, launched a shot from almost seven feet behind the 3-point line over the outstretched arms of 6-foot-9 forward Jorge Garbajosa and swished it with three seconds remaining to give Serbia a stunning 92-89 victory in Istanbul, Turkey.

It was Teodosic’s only 3-point basket of the game. He was 0-f0r-6 until Serbia’s last possession.

“He’s a great player and he has a great feeling for the big shot,” Spain coach Sergio Scariolo said of Teodosic, who thoroughly outplayed Spain’s Ricky Rubio in a battle of Europe’s top point guards.

Spain had one last chance to tie the game, but inexplicably ran a very awkward and low-percentage play for Garbajosa near halfcourt and the Real Madrid forward dribbled the ball off his leg and couldn’t even get a shot attempt as time ran out.

The victory was extra sweet for Serbia because just a year ago it was embarrassed by Spain at the 2009 European final. Serbia waited a year to exact revenge on the Spaniards, and it certainly made the most of its opportunity Wednesday night.

Six players scored in double figures for Serbia and the team converted 15 of 30 shots from 3-point range. “We were not able to stop them on the long shots,” Spain guard Juan Carlos Navarro told the Associated Press. “That’s why we lost and I believe that’s why they deserved to win.”

Navarro did his best to keep Spain in the game, leading all scorers with 27 points. Garbajosa finished with 18 and Rudy Fernandez had 15 points, but was 0-for-5 from behind the arc. Rubio, who was in foul trouble in the second half, made just one of four shots and recorded only three assists.

Marko Keselj and Novica Velickovic led a very balanced attack for Serbia, scoring 17 points apiece. Dusko Savanovic added 15 and Nemanja Bjelica had 14. Keselj and Bjelica were a combined 8-for-9 on 3-point shots.

“I think it was a very, very tough game. Maybe the best one until now in Istanbul,” said Serbia coach Dusan Ivkovic, whose team will take on either Turkey or Slovenia in the semifinals.

“It’s very difficult to forget this kind of game, but we have to try to forget everything that happened tonight because in two days we will play in the semifinals,” said Teodosic, who finished with 12 points, eight assists and five rebounds. He played most of the fourth quarter with four fouls.

It was sweet redemption for Teodosic, who took his share of shots from the media after being suspended two games for taking part in an ugly brawl during an exhibition game against Greece prior to the start of the FIBA World Championship in Turkey.

Teodosic said he was sorry for the incident and regretted the embarrassing melee ever happened. He and teammate Nenad Krstic were both suspended at the start of the tournament. Krstic, who plays for the NBA’s Oklahoma City Thunder, battled Spain’s Marc Gasol for much of the game. Both players had 13 points, but Krstic outrebounded the Spaniard, 9-5.

It was a near-perfect game for the Serbians, who entered the tournament as a middle-of-the-pack squad and wasn’t considered a serious threat to medal.

Even though the Spaniards entered the World Championship without star players Pau Gasol and Jose Calderon, they were still considered heavy favorites along with the United States and Greece because of their talent and depth (nine Spanish players have NBA ties).

The 2010 World Championship wasn’t very kind to Spain. The 2006 champs lost twice in the preliminary round and capped its tournament with a heartbreaking loss to Serbia.

Having Pau Gasol and a healthy Calderon could have changed Spain’s fortunes at the worlds. But you can’t take anything away from Serbia, who took advantage of Spain’s porous zone defense, some lack of consistency on offense and questionable decisions by Scariolo.

Spain’s players didn’t have a good run, but they certainly didn’t get any help from their head coach. Scariolo couldn’t find a way to get Marc Gasol the ball in key situations, and he also didn’t have his team prepared against France.

There were times when Scariolo felt obligated to play all his players, which hurt the flow of the offense. Having too much talent on one team can be a negative. But more importantly, the high expectations contributed greatly to Spain’s early exit.