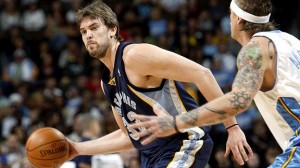 Marc Gasol, who had a solid year with the Memphis Grizzlies last season, won't have his older brother Pau at the 2010 FIBA World Championship but that shouldn't stop Spain from contending for the gold medal. (GETTY IMAGES)

It has been a banner year for Spain so far, and the country’s great karma could continue at the 2010 FIBA World Championship in Turkey, which begins Aug. 28.

Despite not having its best player Pau Gasol – who has decided to skip the FIBA World Championship this summer to give his body some much-needed rest – Spain remains one of the favorites to capture the gold medal in Turkey because of three reasons: center Marc Gasol, Pau’s younger brother who is slowly blazing his own trail in the NBA; shooting guard Juan Carlos Navarro, the reigning Euroleague player of the year; and his Euroleague teammate point guard Ricky Rubio.

Both men gave the United States fits in last Sunday’s exhibition game in Madrid, a game narrowly won by the U.S. 86-85. Navarro had 20 points to lead Spain and Gasol had 17 points and had his way against the Americans in the low post.

For years, Marc Gasol, nicknamed “El Tanque,” has played in the shadows of his much celebrated brother. But the last couple of years, Marc has come into his own and had a breakout season with the Memphis Grizzlies last year.

The 25-year-old Barcelona native averaged career highs in points (14.6), rebounds (9.3) and field-goal percentage (58%) last season – his second as an NBA pro – and has become one of the central figures in the Grizzlies’ youth movement. The 7-foot-1, 270-pound big man is a much more physical player than his older brother. He could very well be the best post-up player at the World Championship in Turkey, and now is a good time to break out of his brother’s immense shadow.

Marc Gasol may not have his sibling on this year’s Spanish national team but he’ll have his basketball brethren with him, including veteran guard Navarro. Nicknamed “La Bomba” for his big-time long-range shots, Navarro has been a fixture on Spain’s national team for 10 years.

“For many years Juan Carlos and I have known each other and we are like brothers,” Marc Gasol told FIBA.com. The 30-year-old Navarro, a former member of the Memphis Grizzlies who led FC Barcelona to a Euroleague title last season and is the reigning Euroleague Final MVP.

“Being in the same room as Juan Carlos is like being with my brother Pau, because they are very similar,” Gasol added. “I have a lot of affection for Juan Carlos.” 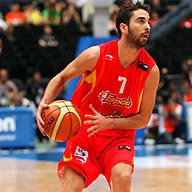 Juan Carlos Navarro will captain Spain at the 2010 World Championship in Turkey.

Indeed, the camaraderie at Spain’s training camp appears to be good, with Rudy Fernandez and Rubio together like old times at DKV Joventut, and Felipe Reyes and Jorge Garbajosa also hanging out just as if they were with Real Madrid.

Spain is a close-knit group, the core of the squad has been together for at least four seasons and much of the roster remains the same when it won the gold medal at the 2006 World Championship. Navarro, the team captain, told FIBA.com that he has a good feeling about the squad. “Most of the group is the same as last year,” he said, referring to the team that took gold at last year’s EuroBasket. “We know each other well and the know the style of play.

“We must try to play like last year and have a mind to defend. Then with our quality in attack we have everything.”

With the injury to Jose Calderon, who appears to be out of the World Championship because of a leg injury, Rubio will assume the starting role at point. Rubio showcased his talents against the U.S. in the exhibition game earlier this week in Madrid. His length bothered the guards and his passing off pick-and-rolls exposed the big men. Rubio will make a huge impact at the World Championship, no doubt.

The rest of Spain’s starting lineup includes Navarro at shooting guard, Fernandez on the wing and Garbajosa and Marc Gasol in the frontcourt. Spain has a NBA-type roster that can match up against any team, including the United States. Its five starters took part in the 2008 Beijing Olympics (minus Pau, of course), losing to the United States in the gold-medal game, and nine of the 12 players on the squad are either playing in the NBA of was drafted by an NBA franchise.

Spain and the United States are obviously the two favorites at the World Championship, and Spain could have a slight edge because it has a much more experienced group and Team USA doesn’t not have a whole lot of size to match up with Marc Gasol in the middle.

But Navarro downplayed the importance of the highly anticipated matchup with the United States and didn’t discount the other teams in the tournament.

“Hopefully we can play them, as that would mean we have gone a long way in the championship, but now it is a bit early to talk about it,” he said. “There are many contenders. Argentina, the United States, Serbia, who had a great tournament last year, but it is too early to think about that now. We are only in the early stages of workouts and there is much work remaining.”