Throughout Allen Iverson’s brilliant 14-year NBA career, he has always been able to bounce back from injury, adversity or controversy. After the Memphis Grizzlies terminated his one-year contract, the 10-time NBA All-Star is now out of work and can’t seem to find a team that will give him another opportunity.

Iverson’s stint with Memphis lasted 65 minutes and three games coming off the bench, hardly anything to write home about. His final game was Nov. 6 in Los Angeles in which he scored eight points in 21 minutes before going on his personal leave of absence.

Memphis owner Michael Heisley recently told the Associated Press he would have traded Iverson if a good deal came. But there were no takers. Few NBA teams showed interest in the 34-year-old guard before Memphis signed him to a one-year, incentive-laden contract on Sept. 10. Memphis fans greeted the biggest star ever to play for the Grizzlies with a big crowd for his introductory news conference and eagerly bought up his No. 3 jersey, though he wound up never playing a game on the team’s home court. 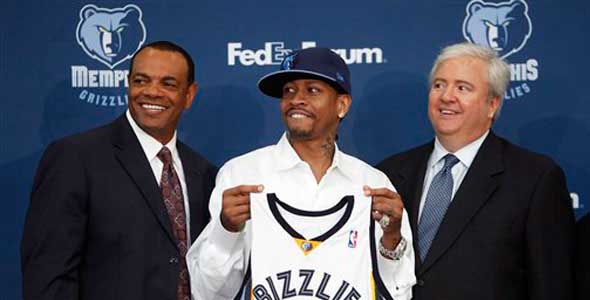 Allen Iverson's stay in Memphis was short and bittersweet. The 14-year veteran was recently waived.

Iverson didn’t help himself much during his short stint with his fourth NBA team. He missed the preseason with a partially torn left hamstring and didn’t debut with the Grizzlies until Nov. 2 at Sacramento.

The final straw for Iverson was the decision of the coaching staff to bring him off the bench, something Iverson had a problem with when he was in Detroit. “I had no problems (with the hamstring),” Iverson told reporters. “I had a problem with my butt from sitting on that bench so long. That’s the only thing I got a problem with.”

The four-time NBA scoring champ became the 16th player in league history to score 24,000 points in his career in his second game against the Golden State Warriors. Iverson can still play and he hasn’t forgotten how to score. He may not be a 25-point scorer anymore but he’s still capable of getting 17 to 18 points in the right situation.

So where should he go, or which teams are a good fit for him? Here are some possible destinations for The Answer:

–New York: GM Donnie Walsh is not opposed to bringing in a big name to boost the Knicks’ sagging Q rating for at least one season before they go on a full-court press in the 2010 free-agent sweepstakes. The Knicks need a headliner to keep their fanbas interested, and Iverson would certainly bring some star power to Madison Square Garden – even for just a few months.

–Charlotte: The Bobcats recently traded away guard Raja Bell and could use another scorer. A backcourt of Raymond Felton and Iverson could potentially work, and A.I. would reunite with the ONLY coach he ever respected in Larry Brown.

–Philadelphia: What better way to end your career than return to the place that you called home for 10-plus years. The Sixers have a lot of young talent but could use a veteran player who can influence the team on and off the court. Iverson can pair up with Lou Williams in the backcourt and has experience playing with Andre Iguodala.

–Miami: The Heat are more of a longshot because they like to develop young guys like Mario Chalmers, Daequan Cook and Michael Beasley. But Dwyane Wade would welcome another stud on South Beach, so don’t count them out.

–Europe: This would be the most logical choice and financially sound. Some of the rich Euroleague teams can afford to pay Iverson above market value, and he can sign a long-term deal if he wishes. Also, Iverson would be THE featured attraction. He can start, play the whole game and take all the shots he wants. No NBA team can offer those enticements.