It was the NBA’s worst nightmare, a day that gave the sport a permanent black eye.

Five years ago, on Nov. 19, 2004, the Indiana Pacers visited the Palace of Auburn Hills, Mich., to play the Detroit Pistons. As with every Pacers-Pistons game during that time, the game was very chippy and physical.

With 45.9 seconds remaining in the game and the Pacers ahead 97-82, Pistons center Ben Wallace and Pacers forward Ron Artest got tangled underneath the basket. Wallace didn’t appreciate Artest’s hard foul so he shoved him with both hands.

After referees and players tried to separate the two, Artest goes to the scorer’s table and lies there for a few seconds. What transpired next was the ugliest bench-clearing, fan-clearing melee in NBA history – and quite possibly in American sports history. 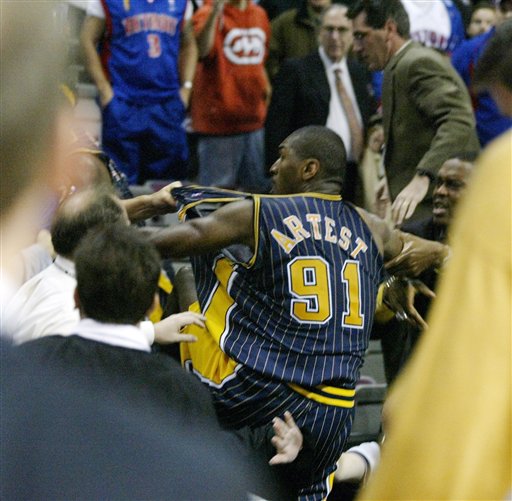 Five years ago, Ron Artest went into the stands at the Palace of Auburn Hills and forever embeded an ugly image of the NBA and its players.

A fan threw a cup of beverage in Artest’s direction and, in TruWarier fashion, Artest rushed up the stands to confront the perpetrator and the pushing and shoving turned into an all-out Mike Tyson-like punch-0ut.

Pacers forward Stephen Jackson went into the stands with Artest and began throwing haymakers as if he was in a “Toughman” competition. Soon, fans were punching back and the brawl spilled over onto the court.

A man in a Pistons jersey approached Artest on the court, shouting at him. Artest punched him in the face, knocking the man to the floor before leaving the court. Artest was pulled away, and the fan charged back. Artest’s teammate, Jermaine O’Neal, stepped in and punched the man.

Former Pistons ticket holder and the infamous fan that threw the cup at Artest retold the incident to ESPN’s Jay Crawford Thursday morning.

“I remember throwing the cup, actually a cup of Diet Coke, not a beer, but I had been drinking and I’ve had issues with alcohol in the past,” Green told “ESPN First Take.” “I remember [Artest] running into the stands and grabbing the wrong person and I felt bad. I grabbed Artest from behind, the whole thing was kind of a huge blur. It happened so fast.”

“Just a very bad scene,” he added. “It was a scary situation.”

“He said that he was sorry, that … the whole thing embarrassed him as it did me,” Green said. “He wanted to do something for the community for troubled youth. Of course, I can’t do much on this end without him.

Green was convicted of misdemeanor assault — he punched Artest when the player stormed into the crowd at Detroit’s Palace of Auburn Hills — and sentenced to 30 days in jail and two years’ probation. He also was ordered to attend Alcoholics Anonymous and anger management counseling, and was banished for life from Detroit’s home games.

Artest, who now plays for the Los Angeles Lakers, was suspended for a record 73 regular-season games and 13 playoff games, and lost approximately $5 million in salary. Overall, the NBA suspended nine players for more than 140 games combined, including a 30-game suspension for Jackson, 15 for O’Neal, five for Pacers guard Anthony Johnson and six for Wallace. Others got one-game suspensions for leaving the bench.

Artest and Green will never live down the Brawl at The Palace, but both men claim they have changed since their tempers ignited a firestorm the NBA is still trying to extinguish.

“You know, I realized then the trouble I got in that night pretty much stemmed from alcohol,” Green said. “I wouldn’t have done that sober. Look at the video of people throwing stuff. One little thing triggered this huge event with people throwing stuff and getting way out of hand. It all stemmed from alcohol. If we can control that, we can control these situations.”

As for Artest, Green said: “He’s reached out to the community. He’s trying his hardest to let people know he’s not the same person.”