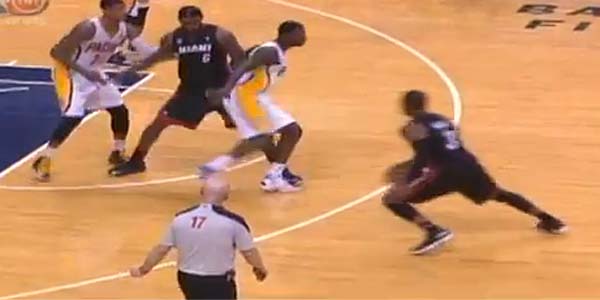 LeBron James is called for an offensive foul while setting a screen on Lance Stephenson.

Game 4 of the Eastern Conference finals between the Miami Heat and the Indiana Pacers was headed for another classic finish but for whatever reason another Big 3 took over: Joey Crawford, Rodney Mott, and Derrick Stafford.

They were the referees who officiated Tuesday’s playoff game, a game that was brought to its knees by some of the worst calls you’ll see in a basketball game.

The most crucial call came with 56 seconds left in the fourth quarter and the Pacers holding a 96-92 lead. LeBron James was called for an offensive foul while setting a screen against Pacers guard Lance Stephenson. It was LeBron’s sixth foul, sending the Heat star to the bench for good. It was only the second time LeBron fouled out of a playoff game, and the fifth time of his career.

When you watch the video, James barely touched Stephenson. It was the kind of call you’d hardly make during a hard-fought playoff battle in which physically dominates every minute of every game.

“I didn’t believe it was an offensive foul,” James said. “I was going to set a screen and I feel like I was stationed there. D-Wade rejected the pick-and-roll and Lance actually ran into me.”

“I believe I was straight up and down on Paul George on the drive, on the and-one,” said James, who continued by recalling two more questionable calls on him that added to his foul-plagued game. He mentioned the “foul” on Roy Hibbert and the “swinging of the elbows” against David West, as the two main head-scratchers.

“There was a couple of fouls that I didn’t feel like personal fouls on me, but that’s how the game goes sometimes,” James said.

LeBron wasn’t the only Heat star who was bitten by the Official Big 3. Dwyane Wade was called for a questionable traveling violation on a step-back play he has made a thousand times. The call was costly because it robbed the Heat of a 3-point shot by Shane Battier that would have cut the lead to 96-95.

The bad calls wasn’t just on the Heat. The Pacers got robbed of a fourth-quarter possession when Hibbert’s missed shot that clearly hit the rim but Crawford awarded the Heat the ball for what he thought was an air ball and a shot-clock violation. That sparked a Heat run that tied the game at 83, and Miami eventually took an 89-86 lead. But that would be the last time the Heat would have the lead, as the Pacers — and the refs — took over and held the Heat to just three points the rest of the game.

“We had several guys in foul trouble,” Heat coach Erik Spoelstra said. “The last time LeBron fouled out in a playoff game was last year in Boston. It doesn’t happen very often. Dwyane [Wade] was in foul trouble the whole game, CB [Chris Bosh] was in foul trouble. You have to overcome a lot in the playoffs. It’s not easy to compete for a title.”

Conspiracy theories will point to these controversial games as reason enough to believe that the NBA league office are pulling the strings and dictating the number games in a series.

The Western Conference finals ended in a sweep, so having another short series leaves the NBA with a bunch of off days before the start of The Finals. Hard to defend the league after what transpired in Game 4 between the Heat and Pacers.