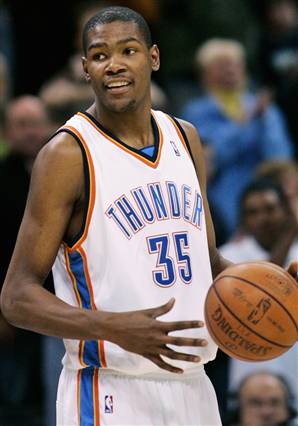 Kevin Durant should be a lock to make the U.S. men's basketball team that will compete in the 2010 FIBA World Championships. (ASSOCIATED PRESS)

USA Basketball recently finished a mini-camp in Las Vegas – what better place to hold a mini-camp than the entertainment capital of the world – and the system that Jerry Colangelo put in place four years ago seems to be working like a charm.

Mike Krzyzewski is back as head coach of Team USA and the coaching staff he brought to Beijing is also committed to serving another term with Coach K.

Barring injury or some unforeseen engagement, the eight studs who led the United States to a gold medal in the 2008 Beijing Olympics are back on board, which means only four roster spots remain unfilled.

But unlike in years past when USA Basketball would just take the next available player on the chart, the Colangelo-Coach K way is to find players who will fill a role and complement the rest of the squad.

With apologies to Vincent Thomas of NBA.com, here are four suggestions to start with:

KEVIN DURANT, Oklahoma City Thunder: The second overall pick in the 2007 put on a impressive workout during the mini-camp and is a lock to be the ninth player on the roster. Durant, a big guard (6-10) who can also play small forward, is already considered one of the top shooters in the league even though the former Texas Longhorn is only entering his third season as a pro. He averaged 25 points per game last year and shot an incredible 42% from 3-point range. Having a good perimeter game is paramount in the FIBA game and Durant can definitely fill the role of “Sniper.”

LaMARCUS ALDRIDGE, Portland Trail Blazers: Aldridge is perfect for the international game. He’s a big man (6-11) who can face up and shoot from mid-range. Versatility is really important in FIBA competition. Past Team USA failures can be traced to the inability of its bigs to defend quick centers and forwards. During the 2008 Olympics, Howard and Bosh complemented each because they have contrasting styles. Aldridge is cut from the same cloth as Bosh, and has the game and the demeanor to compete in the big stage. 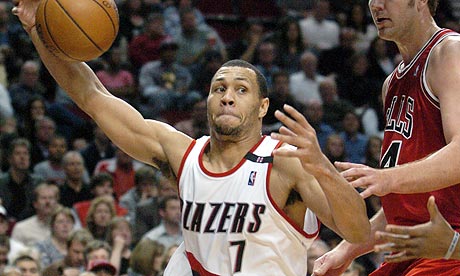 Portland's Brandon Roy should be a good fit for Team USA. (ASSOCIATED PRESS)

BRANDON ROY, Portland Trail Blazers: Instead of going with a traditional point guard, such as Rajon Rondo or Derrick Rose, Roy would be better suited on this team. At 6-5, Roy can play either guard position and is saavy enough to find his shots within the team concept. Rose and Rondo need the ball to be effective neither one has a consistent jump shot to run teams out of their zones. With Paul and Williams playing the bulk of the minutes, Roy is basically just insurance policy in case either PG gets hurt and gets into foul trouble. He is a good enough ball handler to handle the point and, when Kobe or D-Wade start isolating defenders, Roy can easily slide into the SG spot and play off the ball.

BLAKE GRIFFIN, Los Angeles Clippers: To be a good 12th Man on the Redeem Team, you need to have a pair of good, strong shoulders to carry all the luggages for Mr. Bryant, Mr. James and Mr. Wade. Griffin is the man for the job. He’s 6-10, 250 pounds, has super-strong arms and has the Body by Jake. Christian Laettner perfected the role of 12th Man back in 1992 for the original Dream Team. Laettner’s biggest contribution to the team was hauling the bags from the hotel lobby to the team bus.