After posting a perfect record during pool competition, the French national team were far from perfect in its 86-66 loss to Spain in the quarterfinals of the 2009 European Championships.

The devastating one-sided defeat is just the latest in a long line of disappointments for France on the international stage since 2000 when it captured the silver medal in the Olympic Games. Despite a roster that boasts several NBA players, France has never finished higher than fourth in the FIBA World Championships (and that was in 1954), hasn’t finished higher than third in the past five European Championships, including a shocking eighth-place finish in 2007, and has failed to qualify in the past two Olympics. 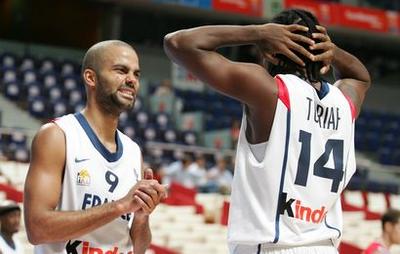 France, led by Tony Parker and Ronny Turiaf, was eliminated by Spain in the 2009 European Championships.

France has sent more players to the NBA than Spain, but yet the Spaniards have enjoyed much more success.

That was evident during the quarterfinals of this year’s European Championships as Spain, led by Los Angeles Lakers star Pau Gasol, played at a much higher level, running up a 23-12 lead early and extending the gap from there with hot shooting and a smothering defense.

“That was a tough game for us,” Diaw said. “They just played better than us from the first to the last minute. We were behind them pretty much the whole game, and trying to come back on a great team like Spain is tough.”

Gasol led Spain with 28 points and nine rebounds, dominating in the paint on both ends by muscling down low for baskets on the offensive end, and blocking three shots and altering more on the defensive side. And that was despite France throwing Turiaf, Diaw and Florent Pietrus at him.

“It’s no surprise — he’s one of the best players in the world,” Diaw said of Gasol. “Obviously it’s difficult to play against him. You have to double-team him and because they have great players around, you can’t help because they have (Rudy) Fernandez and (Juan Carlos) Navarro who are great shooters.”

Florent’s brother, Mickael, did not play in this year’s Euro Finals, as did Petro, Gelabale, Diawara and Noah. Because France did not have its full compliment of NBA standouts, it was forced to rely heavily on Parker, who struggled against Spain’s suffocating defense.

Spain coach Sergio Scariolo praised his team’s defensive effort, singling out Ricky Rubio and Raul Lopez for limiting Parker – the undeniable star and face of the French national team – to just six points on 1-of-6 shots from the field and had three turnovers. The Spurs’ All-Star point guard had been averaging 16 points per game.

“They did a fantastic job on Tony,” Scariolo said. “They were supported by the team, of course, but the individual effort was unbelievable.”