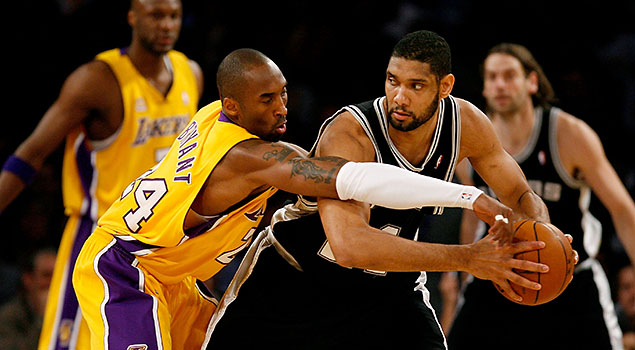 Tim Duncan was one of the most unique superstars in basketball. He did everything low key. You never heard him publicly complain about his contract. You never heard him say anything bad about a coach or player. And on his final NBA game in 2016, he briefly pointed a finger to the ceiling before walking into the tunnel with a towel over his head.

It was a complete contrast with Kobe Bryant’s final game with the Los Angeles Lakers. Kobe dropped 60 points on the Utah Jazz before a raucous Lakers crowd at Staples Center and before Kobe left the court he took the mic, thanked his fans and dropped the mic with his now famous phrase, “Mamba out!”

Bryant gave himself the moniker Black Mamba for the way he quickly struck down an opponent. Kobe’s Lakers teammate, Shaquille O’Neal, gave Duncan the nickname Big Fundamental because of the way Timmy went about destroying his opponents in the most elemental way.

You can’t write Kobe’s basketball biography without Duncan, and you can’t write Duncan’s without Kobe. Both were the center of attention, but in their own special way. They are connected in a sense that Bryant was driven to beat Duncan and Duncan was driven to beat Bryant. It’s appropriate that both men enter the Naismith Memorial Basketball Hall of Fame in the same year. Joining Bryant and Duncan as 2020 Hall of Fame inductees are 15-time NBA All-Star Kevin Garnett, four-time National Coach of the Year Eddie Sutton, two-time NBA Champion coach Rudy Tomjanovich, 10-time WNBA All-Star and four-time Olympic gold medalist Tamika Catchings, three-time NCAA National Championship Coach of Baylor Kim Mulkey, five-time Division II National Coach of the Year Barbara Stevens and longtime FIBA executive Patrick Baumann. Many pundits are calling this class the best ever. Hard to argue that fact.

However, with all due respect to the other greats being enshrined into Springfield, Mass. in 2020, they all fall behind the two transcendent superstars in Black Mamba and Big Fundamental. Both men are not just worthy of the Hall of Fame but they belong in the top 10 of all-time great players.

Bryant will be enshrined posthumously after his tragic death on Jan. 26 in a helicopter crash, making this year’s event extremely somber. We’ll never get to hear Bryant’s Hall of Fame speech, and it would have been a doozy.

Former Michael Jordan teammate B.J. Armstrong said on ESPN’s “First Take” that 6-foot-11 Duncan would have given the ’90s Bulls the most problem.

“Tim Duncan was a marvelous player. He played the game from the four, the five position. He was one of the unique players,” Armstrong said. “Like a Michael Jordan, who could get to spaces on the court you couldn’t do anything about.”

“Technically speaking, Tim Duncan to me is a player that is really as unique a talent as I’ve seen in the NBA,” Armstrong said. “And if you’re going to have a player that’s going to counter the talent like a Michael Jordan, who was almost like flawless technically in his game, Tim Duncan can do that.”

Duncan is regarded as the greatest power forward in basketball. But that’s a bit misleading because Duncan was really a center. Duncan played the majority of his Spurs career at center. He may not start at center most of the time, but he finished games at center almost all the time. Even one of his greatest rivals, Hall of Famer Shaquille O’Neal, considered him a center. His own coach, Gregg Popovich, acknowledged as much when he was asked before a playoff game who the Spurs would start at center. Popovich said, “Tim Duncan, like we have for the last 15 years.”

Popovich, who once described Duncan ‎”like my son,” told an amazing story about Duncan’s first practice with the Spurs. Going into the 1997 training camp, Duncan was the hot-shot rookie and No. 1 pick in the draft. But the Spurs already had an All-Star center in David Robinson. So what did Popovich tell both men on who should play where? “Nothing,” Popovich said.

According to Pop, as soon as the scrimmage started, Timmy went to the low block and David went to the high post near the free throw line. They both naturally took their positions without saying a single word. It was indicative of how Duncan approached his job. No drama. Ho-hum. All business.