The ranking system is based on one man’s opinion and does not follow or conform to any other format, with more emphasis placed on how each player did in the postseason. Last year’s OMFB Furious Five included James Harden (5), Russell Westbrook (4), Kevin Durant (3), Stephen Curry (2), and LeBron James (1).

The debate on who is top gun was settled after the Golden State Warriors swept the Cleveland Cavaliers. 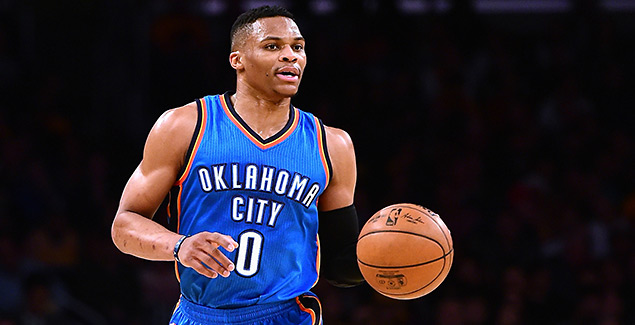 Nobody plays with more raw emotion than Westbrook. Even though his exuberance leads to mistakes, it is the reason why he’s such a difficult cover. “Everybody thinks he should be a traditional point guard like a [John] Stockton or a Mo Cheeks (former Thunder assistant coach),” Durant said during the 2011 NBA Finals. “There’s a lot of people that cannot be like Russ, either. We need him to play the way he plays.” Westbrook’s impact on the court can’t be measured by mere statistics. He is the emotional leader of the Thunder, and his absence definitely altered the entire playoff picture. With him in the lineup, OKC is a championship contender. Without him, the Thunder won’t make it past the second round. Westbrook enjoyed one of his best seasons in 2014-15 as he won his first scoring title (28.1) while carrying the Thunder on his broad shoulders when Durant missed most of the season with a foot injury. Westbrook may not be the prototypical point guard, but what he brings to the table are speed, power and ferocity the league has never seen before at the guard position. In 2014, TNT analyst Kenny Smith said Westbrook will win MVP. That finally came to fruition in 2017 when Westbrook won his first MVP after becoming the first player in history to average a triple-double in a season since the great Oscar Robertson.

The 3-point shot has become an integral part of the game over the last decade. More and more teams are building their game plans around them. The Warriors built their championship foundation on the 3-point shooting skills of Wardell Stephen Curry. Golden State selected the son of former NBA sharpshooter Dell Curry with the seventh overall pick in the 2009 draft. Six years later, Curry is the MVP of the NBA. He also ended the 40-year title drought in the Bay Area. Basketball legend Jerry West believes Curry is a transcendent player who “is going to change what we see in players coming into this league.” “All those little kids would want to look like him [and] play like him,” West said. “He doesn’t have a big body, he’s not the most incredible athlete we have, and he plays the game with finesse. We see a lot of players in this league that are big, strong guys that play with force. To me, so far, finesse has won out over force. It’s a game I like to watch. I love to watch him play.” Curry was the top vote-getter in the NBA All-Star Game and his highlights are viral hits on YouTube. Not bad for a guy who was thought of as an undersized shooting guard from tiny Davidson College in North Carolina. Curry is obliterating every 3-point shot record in the league. He is far and away the game’s deadliest long-range shooter, and holds the record for most 3-point field goals made in a season. But what sets him apart from other great shooters is his ability to handle the ball. “Steph Curry is a great shooter. We have never seen anybody on that level,” Curry’s former coach Mark Jackson said. “Steve Nash played at a high level, a two-time MVP and an incredible shooter — this is a different level. Reggie Miller, incredible shooter. Chris Mullin, incredible shooter. Guys I played with, Dale Ellis, Dell Curry, incredible shooters. But they didn’t have the total package. They aren’t coming off a trap and lifting from 30. This guy just has no limits.”

Can you imagine OKC now had it kept Harden, Russell Westbrook and Kevin Durant? The Harden-to-Houston deal remains one of the most absurd moves in league history. The Thunder haven’t reached the NBA Finals since the trade, while Harden has risen to MVP status. Harden reminded OKC what they’re missing when he put on a memorable performance on Feb. 20, 2013 against his former team. It was a game that’ll convince you that Harden, now out of the shadows of Kevin Durant and Russell Westbrook, is one of the best players in the world. With his Rockets down by 14 with under five minutes left, Harden decided to take the game over. He single-handedly rallied the Rockets, dropping a career-high 46 points in a 122-119 victory that had the Toyota Center buzzing — and the rest of the league for that matter — buzzing. Harden made 14 of 19 shots from the field and made seven of his eight 3-point attempts. It didn’t matter who OKC put on Harden, he just kept scoring. The signature play of the evening came at the two-minute mark of the final quarter when Harden faced Ibaka on the wing, gave him one crossover dribble, four between-the-legs dribbles, then stepped backed for a long 3-pointer over the best shot-blocker in the NBA to tie the score at 111. During the 2014-15 season, Harden led the Rockets to Western Conference finals where they fell to eventual champ Golden State. Harden reached a major milestone in his basketball career when he was named the 2017-18 regular season MVP after leading the Rockets to the best record in the NBA. Harden and the Rockets lost in Game 7 to Steph, KD and the Warriors in a hard-fought seven-game series in the Western Conference finals.

If you want to know what makes Durant such a special talent, just watch his MVP speech from 2014. What he said during his emotional address spoke volumes about his character. He thanked all his coaches and teammates, and then he honored his mom. KD is not one of the best players on the planet. He’s one of the best human beings you will ever meet. Durant has already accomplished a lot in his career. He’s a four-time NBA scoring champ, five-time All-NBA selection, Rookie of the Year in 2008 and was named MVP in 2014. He also took home gold medals at the 2010 FIBA World Cup, 2012 London Olympics and the 2016 Rio Olympics. Several teams during the London Olympics paid Durant the highest compliment when they played a box-and-one defense on the 6-10 scoring machine. Remember, Team USA had LeBron James, Carmelo Anthony, Kobe Bryant and Steph Curry on the roster, but it was Durant who received the most attention from the opposition. It is hard to believe Durant could go up another notch in terms of his game, but he did. He added more layers to his already impressive arsenal, and improved statistically across the board. Durant hasn’t shot below 50 percent from the field since 2012. He has a career scoring average of 27 points per game and he’s nearly a 90 percent shooter from the free throw line. After playing in just 27 games in the 2015-15 season because of a foot injury, KD has returned to form the following season and he’s only getting stronger with each passing game. Durant made the most important decision of his pro career when he left OKC and joined the Warriors, creating basketball’s version of Murderers’ Row. The addition of KD has made the Warriors unbeatable. The Dubs blitzed through the 2016-17 playoffs with record-setting 16-1 mark and followed that with a 16-5 postseason run that culminated in a sweep of LeBron’s Cavs in The Finals. Durant won his second straight Finals MVP award after averaging 28.8 points, 10.8 rebounds, 7.5 assists, and shooting 52 percent from the field. If there any doubts as to who is now the best player in the world, Durant answered them emphatically with a 43-point performance in Game 3 on the road that pretty much sealed the fate of the Cavs and locked up the Dubs’ third NBA title in four years.