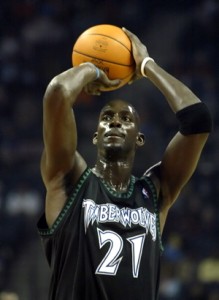 Kevin Garnett spent his prime years in Minnesota before moving to Boston three years ago.

Kevin Garnett can sympathize with LeBron James because he went through the same difficult decision three years ago.

Prior to coming to Boston in 2007, Garnett called Minnesota his NBA home for 12 seasons and the best his Timberwolves could do was reach the conference finals. Garnett stayed loyal to the Timberwolves even through the lean years, but his persistence to stay with the club cost him some of the prime years of his career.

“Loyalty is something that hurts you at times because you can’t get youth back. I can honestly say that if I could go back and do my situation over, knowing what I know now with [the Celtics] organization, I would have done it a little sooner,” Garnett said after the Celtics eliminated the Cavaliers in Game 6 of the 2010 Eastern Conference semifinals.

“He should plan on making a decision not just him but for his family, his future.”

Garnett, who turns 34 on May 19, finally won that elusive NBA title in 2008 and now has an opportunity to win another one as his Celtics take on the Orlando Magic in the 2010 Eastern Conference finals.

“I don’t know what’s going through his mind,” Garnett said of James, who can become an unrestricted free agent on July 1 and leave his hometown team of Cleveland.

“He’s a different individual. I haven’t spoken to him or anything, but the world is his. Whatever he wants to do, whatever decision he makes is probably going to be best for him and his family.”