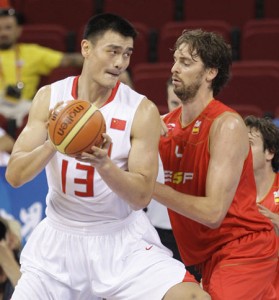 Pau Gasol and his Spanish teammates was put in an embarassing position of having to explain why they agreed to pose for an advertisement that reflected a racist tone.

The ad showed members of the Spanish team using their index fingers to stretch their eyes to make “slant eyes” as part of media day in preparation for the Beijing Olympics. Gasol and his teammates thought the gesture was innocent and was not meant to be demeaning. But after a London paper recently published the controversial photo, Spain’s men’s basketball team was thrusted into the spotlight and needed to defend its actions.

What adds fuel to this fiery issue is that Spain has been in this position before. The Associated Press reported that Formula One driver Lewis Hamilton was subjected to abuse at a Barcelona circuit in February, while former Spain coach Luis Aragones also used a racist remark about France striker Thierry Henry to motivate one of his players. Monkey chants rained down on England’s black players during an international friendly against Spain in a match played in Madrid in 2004, soon after Aragones’ outburst.

So, enter Pau Gasol. The Los Angeles Lakers center and one of the most revered and beloved athletes in Europe and around the world.

Gasol told Yahoo! Sports: “Some of us didn’t feel comfortable doing it just because to me it was a little clownish for our part to be doing that. But the sponsors insisted and insisted. I think it is just a bad idea I guess to do that, but it was never intended to be offensive or racist against anybody.

“I didn’t find it very funny. I didn’t find it offensive, either. I guess some guys didn’t mind. To me I don’t want to be that way, I guess, to be doing that stuff. If anybody feels offended by it we totally apologize for it. We never meant anything offensive by it.”

Whether his apology was by his own admission or Spain’s way of backpedaling, Gasol was a big enough man to step forward and state the obvious that the ad was done in poor taste and should have been pulled. Since he’s always front and center when it comes to Spanish basketball, Gasol wasted no time in diffusing the issue.

If this incident put a black eye on Team Espana, at least Gasol is doing his best in icing the injury and being the bigger man and admitting fault.