The atmosphere at Staples Center on Thursday, Nov. 19, was different. There was a sense of completeness.

Pau Gasol is back and the rest of the league better beware because the Los Angeles Lakers now have all their stars aligned and they are scary good with Gasol in the lineup.

The All-Star forward-center, who missed all of training camp, the preseason and the first 11 games because of a strained hamstring, scored 24 points on 9-of-15 shooting and grabbed 13 rebounds in his season debut and powered the Lakers to a 108-93 blowout victory over the Chicago Bulls.

Gasol didn’t miss a beat, starting the game and playing 35 minutes. He looked sharp and he was in sync with his teammates, including first-year Laker Ron Artest. Who needs the preseason? Gasol is a cerebral player and he knows how to play within the system. And he was also smart enough to stay in shape while he was recovering from his injury. Imagine if Shaquille O’Neal missed all of preseason and the first 11 games of the season? Shaq would be so grossly out of shape for his season debut he probably wouldn’t last past the first quarter. 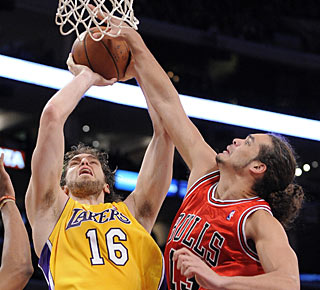 “It’s so much fun to play with our guys in front of our crowd,” Gasol told reporters. “I really wasn’t expecting to be as effective as I was tonight, but my teammates found me a couple of times and made it easy.”

With Gasol at power forward, Andrew Bynum at center, Artest at small forward, Derek Fisher at point guard, Kobe Bryant at shooting guard and forward Lamar Odom and Shannon Brown both coming off the bench, the Lakers now have a solid seven-man rotation that coach Phil Jackson can trust.

The Gasol-Bynum tandem – both 7-footers – makes is extremely difficult for other teams to score in the paint because of their size and length. Then, you bring in the 6-10 Odom off the bench and you have the tallest and deepest frontcourt talent pool in the Association.

The Lakers were 8-3 with Gasol sidelined. I can’t see this team losing more than 12 games this season.