Playing defense is more than just racking up impressive numbers in steals, blocks, and rebounds. A great defender can go unnoticed because you don’t see the spectacular block or steal on SportsCenter or NBA Game Time. And more often, the best defenders come from teams that put a premium on defense. Of the 15 teams that have clinched playoff berths, eight are in the top 10 in points allowed.

The Memphis Grizzlies own the best defense in the Association, and Tony Allen and Marc Gasol are huge reasons why teams feel like they go through a meat grinder whenever they play the Grizz.

Allen is a 6-4 physical guard who specializes on hounding the opposition’s best perimeter player. In the first round of the playoffs, Allen was matched up with Clippers star Chris Paul. In the second round, Allen was matched up with Thunder star Kevin Durant. Both the Clippers are and Thunder are now sitting home in the playoffs. Being able to guard a point guard one round and then turn around and guard a high-scoring small forward shows Allen’s versatility.

Gasol is a 7-foot brute who guards the basket like his life depended on it. He uses his wide frame to push low-post players out of their comfort zone and force tough shots. The Spaniard may not be blessed with great athletic ability, but he has a high basketball IQ and moves his feet well for a big man. Given that he’s the anchor of the best defensive team in the NBA, it was a bit of a surprise the coaches didn’t vote him on the All-Defense first team. 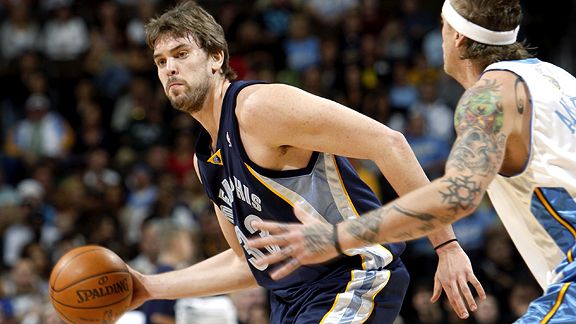 Now, you can see why the sportswriters and NBA coaches were not on the same page this year when it came time to vote for Defensive Player of the Year. If you ask the writers, it’s Gasol. If you go by how the coaches voted on the first-team All-Defense team, it’s Allen.

Using a football analogy, Allen is the shutdown corner while Gasol is the big defensive tackle who stuffs the run and applies pressure to the quarterback. Both deserved to win Defensive Player of the Year, along with Miami Heat star LeBron James. Allen and James tied with the most first-place votes (25).

Traditionally, the NBA Defensive Player of the Year award goes to big men. Since 1992, nine centers have won the award and three of them won it at least three times (Dwight Howard, Dikembe Mutombo, and Ben Wallace). The last time a guard won defensive player of the year was in 1996 when Seattle’s Gary Payton won it.

Allen was part of a Grizzlies defense that allowed a league-low 89.3 ppg. According to NBA.com/Stats, Memphis’ defensive rating with Allen on the floor was 94.3 points per 100 possessions compared with 101.1 points when he was on the bench. Allen may not have won defensive player of the year in 2013, but his reputation is spreading like wildfire and the media may finally give him his due someday.

OneManFastbreak.net picks the five best defensive players in the NBA for the 2012-13 season:

AVERY BRADLEY, Boston, guard
Since Rajon Rondo went down Bradley not only assumed the point guard duties but he has been absolutely dynamite when it comes to stopping the opposing team’s other point guard. The Synergy Sports Data stat shows that Bradley is second in allowing 0.678 points per play among guards involved in 200 or more defensive plays. But Bradley doesn’t need stats to prove how good he is as a defender. Just ask the point guards around the Association.

TONY ALLEN, Memphis, guard
Allen got rave reviews during the 2010 NBA Finals when he gave Kobe Bryant fits in the Lakers-Celtics seven-game war. When Allen was traded to Memphis, the Grizzlies instantly became more of a defensive-oriented team.

PAUL GEORGE, Indiana, forward
George burst onto the scene when he gave Heat star Dwyane Wade fits during the 2012 Eastern Conference semifinals. The Pacers give up the second-least amount of points in the league and George is a huge reason why. George uses his length (6-8) and quickness to disrupt scorers, and he is also strong enough to hold his position in the low post. Watch the way he defends scoring champ Carmelo Anthony in the 2013 playoffs. You can create a DVD on how to play defense just from the Knicks-Pacers series, starring Paul George.

LeBRON JAMES, Miami, forward
James is better at playing defense than the idealized version of an NBA defender, as conceptualized by an analytic system that factors in everything from the precise positioning of every player on the floor to the individual skill-sets of the players involved on a given play. The Heat play great help defense and part of the reason why is James’ ability to cover so much ground. James is the epitome of a two-way player, which is a rarity these days. He’s not only a big force on offense, but he is extremely disruptive on the defensive end.

MARC GASOL, Memphis, center
The Grizzlies own the best defense in the NBA and a big reason why is the big Spaniard in the middle. Sports Illustrated writer Rob Mahoney makes a case for Gasol for defensive MVP. Mahoney wrote: “Gasol’s gift comes in the form of clairvoyance. He’s neither quick nor explosive, but manages to connect the dots of offensive action to give him the jump on a particular play’s progression. With a preternatural knack for timing, he slides into place to contest opportunities just as they become available.”