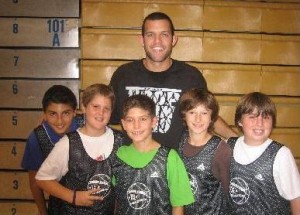 Two-time NBA champion Jordan Farmar recently wrapped up his third annual Hoop Farm basketball camp at UCLA’s Pauley Pavilion. He was joined by his former Lakers teammate Luke Walton on the fourth and final day of camp, and the two joined the campers in a little game of knockout.

Farmar ended up winning the game, but Walton came in third. He was knocked out by an 8-year-old kid named Robby. All in good fun though, right?

The Hoop Farm not only taught youngsters how to play the game and be a good teammate but it also promoted healthy eating habits and the importance of green living. All proceeds from the camp will be donated to The Jordan Farmar Foundation, which aims to improve the lives of children through efforts that promote health, hope and healing. There were about 200 participates at the 2010 Hoop Farm, some of them foster kids. For four days, the kids did basic basketball drills, performed yoga and learned how to become eco-friendly thanks to a special presentation by the Alliance for Climate Education.

I visited Farmar at his basketball camp and he was kind enough to grant me a one-on-one interview. From our conversation, he talked about the success of his Foundation and the Hoop Farm, and more importantly his basketball future.

“I’m really excited at this stage in my life, in my career,” says the newest member of the New Jersey Nets. “A new start for me, playing a different style of basketball for an organization who is rebuilding. We have an owner who is committed to winning; we brought in a new coach who won before and he’s gonna try to get us back to his winning ways.”

Even though Farmar is no longer with the Lakers, he will remain a favorite son of Southern California. He attended Woodland Hills Taft High School, played for Ben Howland at UCLA for two seasons and was an integral part of two NBA championships (2009 and 2010) with the Lakers.

Having lived in SoCal all his life, living on the East Coast will be a big change. But I got the sense that Farmar – who reportedly signed a three-year deal worth $12 million – is definitely looking forward to his move to New Jersey – or I should say Brooklyn.  “Being in that region, the New York-New Jersey area, it’s a great place to live, so much culture, so much to do. I’m just really excited for the opportunity,” he said.

Farmar pointed out that first-year Nets coach Avery Johnson has big plans for him in terms of his role on the team, and Johnson loves the championship experience he’ll bring to the young Nets. He also hinted that he and Nets guard Devin Harris may play together in the backcourt at certain times.

“He was a huge part of my decision-making process,” Farmar said of Johnson. “He and I spoke directly for the majority of the negotiation. He assured me that I was the one he wanted to try to help restore the organization. He liked the fact that I’ve won, that I’m competitive and my skill set. Playing for him, who was a point guard and understands the game the way I do, will help me improve.”

Because Johnson runs more conventional screen-and-roll sets on offense, Farmar won’t have to deal with the restrictions of the triangle offense, which oftentimes didn’t allow Farmar to fully utilize his point-guard skills.

“I’ll get a chance to be what I am on the floor, and that’s what I’m really looking forward to,” Farmar said.

For more information on Hoop Farm or The Jordan Farmar Foundation, visit www.farmarlive.com.